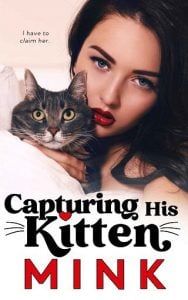 Mariana isn’t the kind of woman I ever expected to have a chance with. Not when I’m a rough enforcer, someone who shouldn’t be within ten feet of anyone as innocent as Mariana. But I can’t shake my need to have her, and when she looks at me with those big eyes, I can feel the heat behind them. She wants me just as badly.
So I take her, all of her, and I claim her body and soul for myself. She’s the only one who’s ever been able to tame my violent heart.
But we have a past full of shadows, and there’s one in particular we’ll have to face before we can start our new life together. Even so, I’ll never let Mariana slip through my fingers, no matter what.

MINK’s Note: Capturing His Kitten originally appeared as a bonus story in the Hidden Love Anthology, but now you can enjoy it all by itself along with your kitty and your coffee.

I stare up at the ceiling, my body numb. Either I’m a psychopath or I’m on emotional overload. I’m not sure how I should be feeling right now, knowing that my father is somewhere close by, likely tied to a chair bleeding to death. I close my eyes to picture the moment again when Fenton pulled out the knife and stabbed my father right in the chest, hoping that maybe this time I’ll have some remorse.

But still I feel nothing.

The only time I can seem to get myself to experience any type of emotion right now is when I think of Fenton. It might have to do with the fact he makes me feel things I’ve never felt before. He also makes me want things I can never have. Especially with a man like him and the world he lives in.

For as long as I can remember, I’ve wanted out of this life. It’s clear Fenton will never leave it since he was more than willing to die for it not even hours ago. Typically, death is the only way anyone can escape this lifelong commitment. But with the way things went down today, I think I’m going to be offered the rare chance of an out. A future that I didn’t think was in the cards for me. How could I ever turn that down? The opportunity is rarer than winning the lottery.

A knock sounds at my bedroom door. Okay, not my bedroom but the one I’m currently staying in at the Lombardy estate. I’ve been here since my father offered me up as a virgin bride to Grant Lombardy, the head of the family.

My father wanted more power and figured merging the families would give him that. But he hadn’t planned on Grant already being madly in love with someone else, a woman I know he’ll be marrying very soon. That is if he pulls through and doesn't die.

He, too, was injured when everything went down and is somewhere in this house bleeding from a gunshot wound. He’s been in and out of consciousness, but they believe he’s going to make it.

The Alderone family was taken down tonight. I’d even helped the Lombardy clan against my own father. I was nothing more than a pawn to my family. They had hoped a marriage between Grant and me would call a truce between the families. But I’m sure my father had a plan to try and ruin them from the inside out. He surely wasn’t out to make peace. He only cares about himself. He would throw me to the devil if it helped him in some way.

I smile a little at that. He calls me the sun in Italian, probably because I’m blond. It’s nothing more than that, I remind myself. Not like I light up his life or anything stupidly romantic. I’d be a fool to think otherwise.

He opens my door, not waiting for me to respond. My heart flutters as it always does when I first see him. He always puts my mind and my body at war with one another.

I hadn’t bothered with locking the door. There was no point. I learned that quickly the first time Fenton let himself into my room when I wouldn’t answer the door. I sit up.

His black hair is wet, and all the blood from the battle earlier has been washed from his body. Some of it was his own. The bruises on his face are already starting to turn purple. Yet it doesn’t do a thing to take away from how handsome he is. I swear it only makes him look sexier.

In the short time I’ve known Fenton, I’ve fallen for him. The day my dad showed up here at the Lombardy estate demanding that I come back home, Fenton had stepped right in front of him to protect me, letting my father know I wasn't going anywhere. It was the first time in my life someone stood up to my father for me.