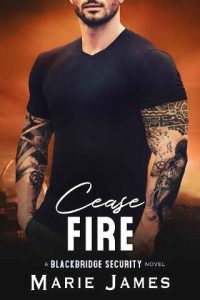 “Would you stop,” Brooks urges, but there’s a lightness to his voice that I can’t seem to manage myself right now.

“Stop what?” I ask. I know exactly what he’s referring to, and I feel a little called out that I can’t seem to get control of myself.

It’s not even my wedding, and somehow I’m filled with nerves. My legs have tapped wildly since we left the building we both have condos in. My palms are slick with nervous sweat, and my heart rate is elevated.

“Twitching,” he explains. “Why are you so anxious?”

“How long has it been since you’ve seen her?”

I keep my eyes locked out the window, but it doesn’t stop my cheeks from heating.

Her is Jules Warren. She’s the most beautiful woman I’ve ever met, inside and out. She’s kind and compassionate. She’s confident without being egotistical.

I accepted long ago that I’d never have Jules in any other way than friendship, despite having lusted after her in high school and college. The friendship we did have flatlined my freshman year when I pushed the issue and didn’t get the result I was going for. Now, we acknowledge each other with stilted nods and common courtesy.

“That long?” Brooks asks, bringing me back to the present and pulling me from the regret I’ve carried around for more than ten years.

“I asked how long it’s been since you’ve seen her.”

“Two weeks, at my parents’ house,” I mutter.

I don’t bother to answer him. It doesn’t stop him from prodding.

“You’ve got that far-away look in your eyes, like you haven’t seen her in years.”

“She’s at my parents’ house nearly every Sunday for lunch. You know that.”

Seeing her weekly is the best and worst torture, but it’s the smiles that don’t reach her eyes that feel like a knife in my gut.

“I still don’t understand why you haven’t sealed the deal on that yet.”

I shake my head, my jaw flexing in irritation. I’m annoyed with his incessant nagging about Jules, but at the same time, I can’t really get mad at him. Brooks has been my best friend since college, but he doesn’t know everything. I never told him about the time I kissed Jules, nor about how she pushed me away.

That day in both our lives irrevocably changed us. Jules had just lost her mother to an aneurysm, and because I pressed my lips to hers, I lost the girl I always saw myself marrying. We were both devastated by our losses, and that put miles of distance between the two of us that had never existed before.

“So you don’t mind if I slide in there this weekend?”

My teeth grind, my fists clenching at the mere suggestion.

Brooks always teases me about Jules, as if the courage to approach her is the only thing stopping me from making her mine. That’s partly my fault for not giving him the full picture.

“It’s getting old, man,” I say, swiping my hand over my face in an attempt to calm both my nerves and the anger that’s rising toward my best friend.

He chuckles, the sound carefree and playful. He’s not one to step on toes or actually attempt to hook up with Jules, but even the prospect of it happening makes me want to choke him out and leave him on the side of the road.

“I’d never hook up with your girl,” Brooks assures me as we pull up to the swanky hotel.

I open my mouth to tell him that I know he’d never do that, and to also remind him that she’s not mine, but a flash of long dark hair catches my attention. Before I can register the woman as Jules, she’s disappeared inside the hotel lobby.

“Can we wait a few minutes?” I ask stupidly, like an embarrassed child.

“Of course,” he says, the teasing lilt to his voice now gone. “I was just giving you a hard time.”

“Stop that shit,” Brooks snaps, his hand slapping at my thigh. “This is a happy weekend, and there’s still time. Beth is getting married, not the girl of your dreams.”