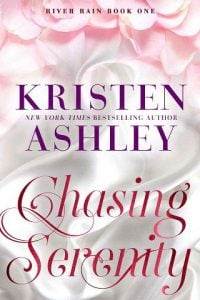 Genny was doing something in the kitchen with a summer salad. Tom was off with Matt at their club, playing tennis, destined, from a recent call from Tom, to be home soon in order to eat the dinner Genny was preparing. Sasha was doing cartwheels on the beach.

And Chloe was on the terrace, arms crossed on her chest, ostensibly keeping an eye on her little sister, but mostly glaring at the sun glinting off the sea.

To Corey’s mind, when it came to Tom and Genny’s children, he thought Matt was okay. Too much like his father, a man who Corey put up with, but Corey had no patience for anyone, especially men, who got everything easy in life, like Tom Pierce had.

Life was not easy.

You suffered for what you earned.

Whatever you had to do to get it.

Tom, his looks, his talent on the tennis courts, his easygoing manner, sly smile, and inability to put up with any shit, it all fell in his lap.

Sweet, beautiful, talented Genny. One, if not the most beloved actress in America.

Sasha, Genny’s youngest, Corey simply did not understand. Although she had some of Genny’s features, including her sunshiny blonde hair, she was not like either her mother or her father.

Or anyone Corey knew.

But Chloe, the eldest…

If she didn’t so look like Tom, she could be Corey’s child.

Chloe Pierce calculated any situation she was in within seconds, deciphering what outcome would serve her purposes the best, and then she set about doing that.

And she was ten.

So now, seeing her seething about something, he went out to the terrace, and he did this not only because, as Genny’s nearly life-long friend, Corey was there, as he often was, for dinner with the family, and Genny was busy with cooking, so he was bored.

He did it because he was interested in whatever was occupying Chloe Pierce’s mind.

As he approached, Chloe sent him a ten-year-old’s version of a look that said fuck off.

And he adored her more.

There were fair few people on that earth who had the courage to send him looks like that, considering he’d amassed the wealth, and thus the power, to buy and sell practically anyone.

Corey ignored the look and moved to the lounge chair next to where she sat at the end of hers, close to the sheet of clear glass set into the railing of a terrace of a house that rested above the cliffs of Malibu.

He sat on his chair’s end too.

“Want to,” he corrected, and heard her instantly suck her teeth in annoyance at the criticism.

Chloe was no fool. In fact, there wasn’t any vestige of that trait in any cell of her body.

She knew her Uncle Corey would have what he wanted.

So she didn’t push it any further.

She trailed off, and Corey gave her more time.

She picked it up again. “Kids are bullying Matt at school.”

This took Corey by surprise.

Matthew Pierce was the vision of his father.

At nine years old, already tall, dark, with boyishly handsome features. He was gifted in athleticism. He was clever.

Though what he also was, was introverted.

He was not a leader, like Chloe (and Tom).

He was perfectly happy doing his own thing.

To the point, even at his age, living in a house full of people, he was reclusive.

The perfect target for jealousy.

The perfect target for bullies.

“And this is your issue because…?” Corey asked.

Her head whipped around to him, and now she was giving him a ten-year-old’s look that said she thought he was stupid.

“He’s my brother,” she snapped.

“He can fight his own battles.”

Corey found this interesting, but not startling.

In all probability, Matt couldn’t care less about the bullying.

Even at nine years old, his intellect was such (and his parents’ lessons were as well) that he was not unaware that the fates had seen fit to grant him more of almost everything than most people received.

Not to mention, if Tom kept honing it, what would be Matt’s version of physical excellence.

Matt Pierce didn’t need anyone, and not only because he already had it all.

That was just him.

“Has it occurred to you that your brother doesn’t care?” Corey inquired. “I’m sure it hasn’t escaped your notice that he’s perfectly fine in his own company.”

“It hasn’t, Uncle Corey, but bullies shouldn’t get away with being bullies. One,” Chloe returned.

“Two,” she continued, “he’s my brother, and no one messes with my brother.”

He nodded and said nothing because he knew there was a three.