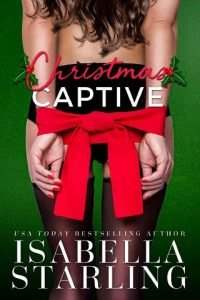 "Christmas isn't a season. It's a feeling."

And that day promised to be even lonelier, now that Lyra had cancelled on me, telling me she had to attend a family dinner. I was pissed off. I wanted to finally fuck her that night, but she took that opportunity away from me. I knew I'd have to punish her for it eventually, and unfortunately for Lyra, I was looking forward to it very much.

Instead of spending the day in my playroom, I decided to pay a visit to Couture House. I'd received countless invitations from them, asking me to come to one of the infamous auctions they held in their building. Today, the Christmas auction would take place, and the most willing and most beautiful toys would be auctioned off to the highest bidder.

I got my toys from a variety of places—sometimes they were the daughters of a business acquaintance I particularly despised, sometimes they just fell in my lap—debutantes, heiresses, all those girls so very eager for a strong hand to put them in their place. My right hand man, Kai, had told me the December auctions at Couture House were especially important. That they saved their very best for them. I didn't want to get my hopes up, but I still found myself quite excited as I made my way to the building in Notting Hill.

Limos and expensive cars littered the street outside, my own joining their ranks. My driver opened the door for me, and I buttoned my blazer, heading inside the building to see whether the promises Couture House made held any value.

Inside, it was all suits and the scent of expensive cigar smoke. Someone asked for my drink preference, and not even a minute later, a tumbler appeared on a silver platter, proudly presented to me by a waiter. With my drink in hand, I was shown to my table—the very best in the room, as it should have been. It was right in front of the stage, giving me a wonderful view of everything that happened up there. Nothing would escape my watchful gaze here. I felt my cock hardening in my pants, excited for what was to come, and eager to plunge into the victim I would pick tonight.

Ever since Lyra cancelled on me, the annoyance I felt was palpable, reminding me that I needed to find a more permanent solution to my problem. I'd been toying with socialites for too long. It was time to found someone worthy of my attention, and possibly, my ring on her finger. But so far, the search for a future Mrs. Kline had been fruitless. I was a picky man, and I had peculiar tastes in my playthings which meant rarely any of the women I was presented with kept my interest for longer than a few days. Sure, I'd make them scream into my silk pillows. I'd make them never forget the name Grayson Kline. But at the end of the day, they were just distractions. A momentary reprieve from what I really fucking wanted.

A mother to my children.

A capable, smart opponent who could match my smarts and my wit.

And someone who wouldn't think twice of kneeling for me and showing me how deeply she cared for me as her wet little mouth enveloped the thickness of my cock.

The auction was gearing up to start, and the rambunctious laughter in the room faded to excited whispers as the head of Couture House made his way onto the stage. He was handsome, around my age but leaner and not as broad-shouldered as I was. Still, I could imagine the girls here fawned over him.

They began bringing out the women. It was a cornucopia of stunning victim after victim, doe eyes wide with excitement and fear, bodies glittering with shimmering powder. Not one of them held my interest despite the fact that they were all painfully perfect. Perhaps that is exactly what bothered me about them—that there was no room for improvement. They were all already perfectly meek and obedient, and unfortunately, boring in their perfection.

I saw the girls notice me. It happened several times when their gazes wandered through the audience, probably wondering who their new owner would be. Their gaze caught mine, and I searched their innocent eyes for signs of what I wanted in a companion. Some of them were kinky, sure. I could tell from the way their bodies arched when they saw me, eager to get closer to me, eager to be beneath me as I pounded into their flesh without reservations. But the spark was missing. And the spark was important. More important than their silky legs and bare breasts with hardened, puckered rosy nipples.

I was getting more and more disappointed by the second, and I knew the girls could tell. One of them, a stunning blonde, stared me down for what felt like hours, trying to catch my attention. But it didn't work. I had no interest in a virginal, perfectly pretty little toy like her. I wanted more. I wanted... someone that wasn't here.