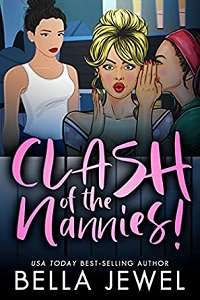 I stretch my fingers out to knock, hesitating for a moment before snatching my hand back in. I’m not sure I should be taking this job. I thought it was a great idea until I arrived at the house for my first day. The house, which is so much bigger than I was anticipating. Hugh told me during our interview that he’d have a new place where I’d come to live with them, but I didn’t think it would be like this.

I’m not rich. Hell, I don’t even know the meaning of the word.

Last night I ate three packets of Ramen for dinner because I couldn’t afford anything else. I did put some vegetables with the last one, so that counts as something, right?

Either way, I’ve never eaten anything fancier than a steak and my clothes could use a serious upgrade. Still, Hugh told me that he wanted someone down to Earth and, considering this was the one choice he had, he was going to make it count. So here I am, ready to start a job that I’m not sure is the best one I’ve ever taken, but I need the money and, oh boy, it’s good money.

Not to mention I get to live in this house.

I spin around to see Hugh standing behind me, baby Starla on his hip, his eyes narrowed as he stands there. God, how long was he there watching me extend my hand out and then snatch it back like a god damned idiot? I mean, come on.

“Shittin’ your pants,” he murmurs, walking up to me. “Don’t worry, I don’t bite. Starla, on the other hand.”

I stare at the cutest little baby in this world, hands down. I’ve met her, of course, that was part of taking the job, but man this one is cute. She looks exactly like Hugh, and even though they ran a DNA test, there is no missing it. You’d have to be blind to not see who her father is. She has the same dark blond hair and gorgeous hazel eyes. The same olive skin as her dad. The only difference is, well, she’s a girl.

Hugh, man, he’s something else entirely. He looks like the biker version of a Ken doll. Clean shaven and, though I’m more often than not a fan of beards, this suits him because he has the most chiseled jaw I’ve ever seen. He’s got this thick hair that always falls over his face and his eyes are so gorgeous you could easily spend a good portion of your day getting lost in them.

“Hi, cutie,” I say to the gorgeous bub, who gives me a big toothless grin. “You and I are going to be great friends.”

I roll my eyes. “I don’t know why you think that matters.”

He gives me a look that has me bursting out laughing. His mouth doesn’t twitch, not even a little, but his eyes light up, and I figure that’s worth something.

I bite my lip as we walk inside the massive house. Looking around, I can’t say I’ve ever seen something this nice. “Holy wow, you rented this place?”

He grumbles low. “Fuck, had no choice. It’s the smallest she’d go.”

I want to wheeze, but that would be rude, so I hold it in.

God, this is the biggest damn house I’ve ever been in and it’s the smallest she’d go?

I haven’t had the pleasure of meeting Delilah yet, not officially, anyway. Apparently, Hugh got to choose the nanny, that was part of the deal, and so here I am.

“Damn, I’ve never been in something this size in my life.”

Hugh grunts. “You and me both. Come on I’ll show you to your quarters.”

“Quarters?” I croak. “What is this, Beauty and the Beast?”

He walks me down some long halls and out the back. Joined to the house is a gorgeous little cottage, kind of connected by a small porch. I stare at it, and immediately fall in love. It’s the nicest thing I’ve ever seen and when we walk inside, it takes all my power not to squeal with delight. Oh, it’s perfect. Absolutely perfect.

“I get to stay here?” I ask, staring at the quaint little home.

“Not big enough? It’s incredible. I love it so much.”

He stares at me blankly. “You and Delilah won’t get along just fine.”

I walk over to the bed, running my fingers over the small quilt and smiling at its beautiful pattern. So cozy. So warm. This is everything.