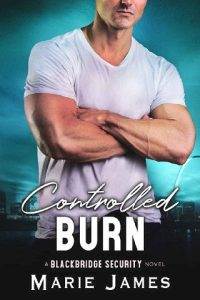 “Stop staring at me. I already answered your question.” Ezra sighs again, his agitation growing with each roughly exhaled breath.

I cross my arms over my chest and dig my feet in.

My brother has acted like this for as long as I can remember, and since he’s ten years older, that has been my entire life.

“I’m not,” he argues, but then he clamps the bridge of his nose between two fingers and sighs again.

“If you just tell me what’s wrong, I’ll fix it and you can relax.”

My brother is the laid-back sort. It’s very seldom that something bothers him, but when it does and that irritation comes to a head, stand back and take cover. This is why I’ve been needling him for the truth for the last five minutes. I don’t want him to get so annoyed that he explodes. He’s as prone to off-the-wall reactions as I am.

“Do you see this place?” he asks, sweeping his arm out to indicate the living room.

“You want me to vacuum?”

He shakes his head, sighing again in a way that makes me believe he thinks I’m a little slow on the uptake today.

His eyes find mine, and with the tiniest shake of his head, I know that the dusting and vacuuming are the least of his concerns.

“What about the rest of the clutter?”

I look around the room, trying to see it all through his eyes, but it only looks like a normal, lived-in room to me.

“Where else am I supposed to put it?” I ask, my own irritation growing.

My eyes turn to slits as I glare at him. “I had a house, remember?”

“Those were the days,” he mutters.

“And somehow it’s my fault for the owner selling it right out from under me?” I shake my head, trying to ward off the familiar burn at the backs of my eyes.

Although crying solves nothing, I do it much too often lately. I can normally wait until I’m in the shower, so no one is the wiser about the disappointment I feel in myself. Suffocating under the weight of failure is bad enough. I don’t want eyes on me, witnessing the way I break down nearly daily.

“If you didn’t want me here, you shouldn’t have offered.”

I stand from the sofa, needing to get away.

He doesn’t add a but. There’s usually a but when he states things in this way.

“I think my trip will help level me out.”

I turn back to face him. He hasn’t mentioned a trip, or maybe he has, and it was when I wasn’t focused completely on him. I have a lot going on in my life, and I always feel like I’m split in a hundred different directions. Nothing in my life ever gets all my attention. Even now as he speaks, my head is wondering about finding my own place, not forgetting the dusting and vacuuming, and a million other things.

“Trip?” I manage to ask before losing complete focus once again.

“I’m going to Vegas,” he says with a groan. “We talked about this at least three times in the last week.”

I nod with a small smile, but his frown tells me that I’m not fooling him. I’ve grown used to the disappointment in his eyes, but the recognizable look doesn’t ease the sting of it any.

As if I couldn’t be distracted any further, Evie swoops into the room.

“I can’t think with all of this yelling,” the parrot snaps, sounding so similar to my and Ezra’s mother it makes me smile.

“And then there’s that,” my brother snaps, his irritation growing even more. “That damned bird shit on my suit jacket yesterday morning.”

I frown at the bird. She’s completely housebroken, knowing she’s only allowed to use the bathroom in her cage. She only does what Ezra is describing when someone makes her mad.

That’s the only other reason for her shitting on his clothes.

I have no idea why Evie hates men, but she has since I got her. She loathed my ex and would fly around and crap on him every chance she got. It should’ve been a warning sign, but I have several reasons I can’t hate the man. Despite being a total loser, he gave me three reasons to live.

“Men are pointless,” the bird mutters as she walks around on the coffee table separating my brother and me, and before I can scoop her back up to carry her to her cage, she stomps her foot and hisses in my brother’s direction.

He slides back further on the couch as if he’s facing an angry lion rather than a bird weighing only a pound and a half.