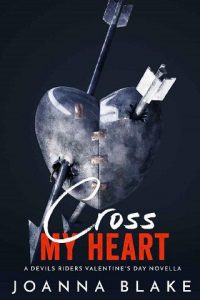 “Now. Now girls. Don’t fight over me,” Janet said weakly. She coughed and Kaylie and I exchanged a glance. The gorgeous red hair was dull and lifeless, and her slender shoulders were thin, covered by a silk scarf. An IV bag filled with alarming colored fluid was dripping slowly into her arm.

I’d thought it was my week to come for chemo. Kaylie apparently thought it was her week. But with the way Jan was looking, I was glad we were both there.

She had been so strong since the start of this journey. But the cracks were beginning to show. Not that she ever gave into tears. Not in front of any of us, at least. And I highly doubted she cried in front of Jack.

How horribly lonely that must feel, I thought to myself.

“Did you drive yourself?” Kaylie asked, looking more worried than she should. Not that she shouldn’t be worried. The truth was, we were all way beyond worried about our Jan. But we all made an effort to keep things light and not show how fucking terrified we all were.

Unless she needed to cry. We would be there for that, too. But so far, Janet had yet to break.

I shook my head at her and mouthed ‘be cool’. Thankfully Janet had closed her eyes and was leaning back in the cushy looking chemo arm chair.

She joked that the chairs were better than the ones they had at the nail salon. ‘One of the perks’ she said. She was never one to feel sorry for herself, even though she had every reason to indulge in a little self pity. It was one of the many, many things I admired about my fierce, fabulous friend.

“Jack dropped me off. He didn’t want to leave me, poor man. He is way too big to hover.”

She was being her usual sassy self. But we knew better. I forced a smile and looked around for chairs. The nurse saw us and helped us drag over a couple of visitor seats. They knew Janet would be here for hours. Sometimes she napped. But we were here for moral support, even if I had to get up and walk around once in while because I was so very pregnant.

Jack had been banned from the chemo room after the first week, when he glared at the IV and broke the doorknob off when Janet told him to leave the room.

He hadn’t meant to. But he loved her so much that he couldn’t stand watching her like this. The chemo was uncomfortable going in, and sometimes she got the shakes. She said since the treatment started three months ago, she hadn’t been warm for a minute. Not even in a hot bath, or sitting in the sun. Not even with Jack or her babies snuggled up to her.

Jack was one of the biggest and warmest people I knew.

“Any news?” Kaylie asked, scooting her chair closer and speaking in a soft tone. There were other patients in here. But there were curtains separating everyone to give them a modicum of privacy.

“Scan was just a few days ago. I know the doctor will call soon. Hopefully…” Janet trailed off, like she was afraid to wish for a good report. Afraid to hope.

After the last two scans had shown zero improvement, I didn’t blame her.

Apparently, none of the girls had. I hadn’t asked the guys, other than Donahue. But I doubted they were braver than we were.

It was too morbid to think about. I wasn’t ready to accept the worst case scenario. But I knew that if things didn’t get better soon, I would have to open that envelope. I would read my letter before she died. If that was what was going to happen.

But I couldn’t think about that. Not today. Hopefully, not until we were eighty something years old, sitting on a porch together spiking our lemonade and playing canasta.

I simply could not imagine a world without Janet.

“You can’t do that,” Sally said as we shut the bedroom door. Janet had dozed off almost immediately after we drove her home. Jack was supervising dinner and the kids. We would take over for him soon so he could go and sit with Jan while she slept. He liked to do that.

But right now? It was the calm before the storm.

We all knew within the next few hours, she would be burning up, throwing up, and generally miserable for a couple of days. Too sick to sleep for more than twenty minutes at a time. She had actually fallen asleep with her cheek on the toilet more than once. That’s how bad it was. The chemo was brutal. It killed him to watch her go through it, but he never left her side.