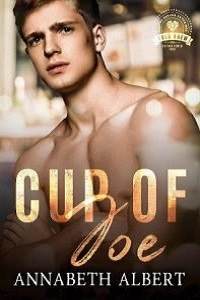 “Go easy on me.” The cutest guy I’d seen in quite some time had a voice made for begging. Under other circumstances, this development would thrill me. But it was ten o’clock on a Monday morning, and he was the only thing standing between me and my coffee fix. Also, the guy was actually little more than a kid—early twenties and in college most likely, and he seemed more scared than flirty.

I’d been craving my usual blended drink all morning, but the kid’s big, hazel eyes were pools of uncertainty. I’d seen him struggling the whole time I’d been in line at Bold Brew, my favorite coffeehouse. The place was unusually short-staffed, and this newbie barista couldn’t keep up. His floppy, straw-colored hair and lithe build added to his frazzled vibe. He had long arms and legs that seemed to move too rapidly for the small space behind the counter, making me worried for the items in flailing distance. Sexy collarbones peeked out of a too-small Bold Brew T-shirt, and the strain of dealing with a long line of customers was clear from the tension present in his neck and slim shoulders.

So, I did the only sensible thing.

“Drip coffee to go, black, room for cream,” I requested. My sugary yearning would simply have to wait. Helping the kid calm down seemed more important than scarfing down calories I didn’t need anyway.

“Bless you.” Beaming at me, he showed off dimples that were deep and devastating. Forget his incompetence with the espresso machine, the kid was going to make a killing in tips with that smile.

“No problem.” I plunked down a wrapped oatmeal cookie from the display next to the register. I could still get my sweet fix, and seeing those dimples was more than worth it. “First day?”

The earlier rush had thinned considerably, so I didn’t feel bad chatting him up as he fetched a cup for my coffee. The sunny shop was full of midmorning patrons working on laptops at the tables, and a group of college students with textbooks occupied the cushy chairs.

“That obvious?” He turned back to me, smile turning more sheepish. “First week. I wasn’t supposed to be left alone yet, but there was kind of a cascade of unhappy events this morning. And now, I just have to hold down the fort until Blake can make it in.”

“You’re doing great.” I tried to pitch my voice low and reassuring. My size and deeper voice sometimes intimidated younger people like this guy, so I was trying extra-hard to be nonthreatening. He tried to pass me the coffee, but I shook my head. “Don’t forget the paper sleeve for hot beverages.”

“Don’t be so hard on yourself,” I ordered in a sharper tone, forgetting for a moment about being a calming influence. But to my surprise, he exhaled, almost like he was trying to comply, shoulders losing some of their tension.

“Thanks.” Fixing the cup, he gave me a tentative smile. “Better?”

“Much.” Our fingers brushed as he gave me the coffee. He had long, elegant fingers, the kind my mom would have called piano fingers. I smiled back at him, and the moment stretched out. Not an awkward silence precisely, but I wasn’t entirely sure what to do with his gratitude. Eventually, I pointed at the counter. “Now, ring me up so I don’t accidentally walk away without paying.”

“You are not.” I got stern again before handing over my card. “Find a rhythm that works for you. When you don’t have a team on-shift with you, think about doing order-pay-drink, but whatever you do, it’s all about having a routine in place.”

“Routine. Got it.” He nodded seriously, like he might start taking notes next. I loved his earnestness almost as much as those dimples. “You know a lot. Former barista?”

“Nope. Caffeine addict. My work takes me all over the area, so I’ve seen a lot of coffee places in action.”