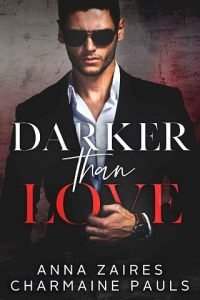 30 kilometers outside of Budapest, 23 Years Earlier

Publisher’s Note: If you’ve read the prequel novella Sweeter Than Hate, you may wish to go directly to Part III.

“Mommy.” The little girl tugs on her mother’s sleeve from the backseat. “Mommy, can I have a cookie?”

She’s bored and hungry. It’s getting dark, and all she can see through the car window are trees and snow. They’re taking the scenic route, Daddy said, a pretty route. But it’s a longer route, and she doesn’t find it all that pretty. She’d much rather they took the train to Grandma Hanna’s place, like always.

“No, my darling. We’ll be having dinner soon.” Her mother turns around in the passenger seat to glance at her. The corners of her blue eyes crinkle with a warm smile, her white-blond hair waving softly around her face as she says, “Just wait a little longer, okay?”

“Okay.” The girl sighs and looks out the window. Trees, snow, trees. The black ribbon of the asphalt winding through the forest. All boring, boring, boring. But she’s a good girl, and she knows better than to whine.

Proper meals are important. Listening to parents is important. And if her mother says there will be dinner soon, she trusts that it is so.

She’s zoning out, half-dozing, when her father suddenly slams on the brakes, bad words she’s only heard on TV flying from his mouth. Her small body jerks forward, kept in place only by the seatbelt cutting into her as the car screeches to a halt.

“Ow!” She rubs her forehead where it hit the hard cushion of the back seat. “Daddy, that hurt!”

“Hush, Mina.” Her father’s voice is strangely tight as he stares straight ahead. “Just be quiet, okay, sweetheart?”

Blinking, the little girl lowers her hand and follows his gaze. Two men are standing in front of the car. Where did they come from? Were they just standing on the road like that?

Is that why Daddy hit the brakes so hard?

One man approaches and knocks on the driver’s window with something hard and pointy.

Her stomach swoops down like a bird, and she suddenly feels cold and dizzy. Because the hard, pointy thing is a gun. And the other man, the one in front of the car, is also aiming a gun at the windshield. Both weapons are black and dangerous-looking, like the ones they show in movies, not bright blue like the toy gun Daddy got her for playing soldiers-and-captives with the neighborhood boys. She’s really good at those types of games, fast and strong despite her tiny build. She can beat all the boys, but she doesn’t have her blue gun with her. And these aren’t boys.

“Get out.” The stranger’s voice is low and mean. “We need the fucking car.”

“P-please.” Her mother’s voice is thin and high, as shaky as her breathing. “Please, don’t do this. W-we have a daughter.”

The stranger’s eyes cut to the girl in the backseat, his cold, cruel stare slicing through her like a knife before he returns his attention to her father. “I said, get the fuck out.”

“Okay, okay. Just a sec.” Her father sounds out of breath as he unlatches his seatbelt. “Come on, honey. Let’s just… let’s go.”

He opens the door and the man yanks him out of the car, causing him to sprawl on the asphalt. Crying audibly, the girl’s mother scrambles out of the car on her own and jerks open the back door, reaching for her daughter’s seatbelt.

The little girl is also crying. She’s never been so scared. It’s freezing outside, and the icy wind bites into her as her mother pulls her out, then reaches back in to grab her coat. She doesn’t understand what’s happening, why these bad men are allowed to do this. Why Daddy doesn’t have a gun of his own so he can stop them. If she had hers, she’d try, even though it’s bright blue and doesn’t look dangerous at all.

The other man, the one in front of the car, comes toward them. Up close, he’s even more terrifying than his partner, his face unshaven and his darting eyes filled with a kind of madness.

“Stop dicking around,” he hisses, his gaze bouncing from his buddy to the girl’s crying mother, who’s putting the coat on the girl with shaking hands, to the girl’s father, who’s hurrying around the car toward his wife and daughter. “We need to go.”

The cold-eyed man gets behind the wheel. “Then let’s go. Get in.” He slams the door shut.

The terrifying man’s gaze darts to him, then again to the girl’s parents—who are now in front of her, shielding her with their bodies.