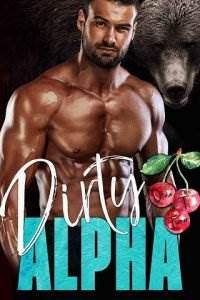 I’m staring at Willow as she holds onto her new baby Lauren, and wishing I could be as lucky as my brother Cameron. He was once like me—lonely, depressed, and dying to meet his mate—and then, like magic, she walked into his life and now he has everything. His mate, a baby, and endless love.

I haven’t been so lucky. My mate is nowhere to be seen.

Willow shifts the baby on her lap and then suddenly, without warning, yanks up her shirt and pulls her boob out.

I’m so shocked from where I’m watching across the ranch that I don’t turn my eyes away fast enough and my unluckiness increases.

“What the fuck?!” Cameron hollers.

I turn and gasp when I see my brother turning bright red as his face twists up in rage. His furious eyes are enough to stop my heart as he squeezes his hands into fists and starts charging over here, looking like he’s about to pound me into mush.

I was admiring the new mother’s love of her gorgeous baby as she cradled her to her chest, but it came out all wrong. Cameron is crazily obsessed with his new mate and doesn’t like anyone gawking at her. Especially when she’s trying to breastfeed.

“I didn’t mean it like that!” I quickly correct as he gets dangerously close. “I was… loving her… chest…”

Shit. This keeps getting worse.

I turn and sprint as Cameron comes raging forward.

My pulse is racing and my lungs are burning as I run as fast as I can across the grassy field toward the forest on the edge of our huge ranch.

“My mate?!” he roars from behind me, way too close for my comfort. “You were staring at my mate?!”

“I wasn’t staring!” I shout back as I beg my legs to move faster. “I was just looking!”

His vicious roar thunders through me and my heart starts pounding as I run. I can’t seem to say anything right today, but it’s hard to get the right words out when you have a vicious beast of an older brother like Cameron closing in on you.

A loud tear rips through the field and when I glance over my shoulder, I now see a furious grizzly bear chasing me.

Fuck! This keeps going from bad to worse!

I head straight for the forest.

Normally, I stay away from this area. My other brother Adrian has claimed this territory and he won’t think twice about sinking his feral bear’s teeth into the neck of anyone who dares to step inside it.

But right now, I don’t really have much of a choice.

Cameron’s bear is gaining on me and he doesn’t look like he’s playing around.

He’s only a couple feet away from tearing a chunk out of my ass when I make it to the edge of the forest. I duck under a thick branch and escape into it, dodging around trees and leaping over roots as the enraged grizzly follows me in.

It’s dark in here with the thick canopy of leaves blocking out the sun. I get shivers and my slick skin explodes with goosebumps knowing that we’re probably being watched by Adrian’s feral bear. Not watched, hunted.

Normally, Cameron’s bear would have stopped at the edge of the forest, not daring to step his paw into this territory, but he’s only focused on making me pay for seeing his mate’s boob. I can tell that thoughts of killing me are the only thoughts racing through his irrational head right now.

He snarls at me as I gain a little bit of distance between us. I’m ducking under branches and jumping over fallen logs. He just crashes through them, exploding them into splinters as he tries to get at me.

He’s making too much noise.

Adrian is going to hear.

If I thought Cameron’s bear was scary, I was wrong. He’s got nothing on the middle Bowen brother’s bear.

Adrian’s enormous grizzly comes charging at us like a bloodthirsty monster. I can feel the vibrations of his huge paws thundering as he rushes at us in a savage fury.

Adrian’s cruel bear has had a hold on him for years. He’s unable or unwilling to live in society, so he lives a primal life by himself in these woods. And he defends them ruthlessly, even from his own brothers.

He snarls as he rushes right at me. Long deadly teeth out. Black claws ready to hack through skin and bone. Bloodthirsty eyes full of violence.

“Not me!” I shout as a tree branch whips me across the face while I run. “Him!”

The enraged bear sees Cameron’s grizzly behind me and pivots on the spot.

He charges at my attacker and my two brothers collide in a crunch of growls and snarls. I glance at them quickly over my shoulder as I flee and the two huge bears are battling fiercely as their roars shake the trees.