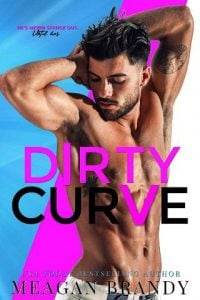 What a fuckin’ joke.

This course was supposed to be my free pass, my easy A.

My ‘show up late, leave early, do whatever the fuck I want’ class.

I mean, come on! It’s anatomy.

I know everything there is to know about the human body. I know what makes it tick, how to bring it to the edge and keep it there, teetering, shivering, just before it shatters.

I know the human body.

Who the fuck is Vesalius?

If dropping names I’ve never heard of isn’t bad enough, professor ‘Kiss My Ass’ starts talking positions. Naturally, I perk up at this, sit straighter in my plastic, cramp-inducing chair even.

Positions? I know them well—horizontal, vertical, a ninety-degree angle, bent over a stadium seat. Give me an hour with a gymnast and I’ll invent some never before attempted shit, but distal and proximal?

Oh, but I’m getting my A ... in the form of A pain in the ass who, as of this morning, was assigned to me, with clear instructions to ‘use my head, the one attached to my shoulders.’

I’m pretty sure those were my Coach’s exact words.

I miss a few assignments and the man drops the gauntlet on me. Mandatory tutoring to keep my ass on track, as if I fucked off the first three weeks of the semester too bad already to make up the difference. I didn’t but fuck it.

Which is why, on this fine Tuesday evening, the one day this week my team’s not on the field, I’m forced to make a quick run to meet the chick who’s supposed to help me pass.

It’s a cold as shit night, so I tug a hoodie over my head, throw on a hat and head out the door.

The athletics center is attached to the front side of our locker rooms and is an easy ten-minute walk from the new pad, so it doesn’t take long to get there. Once in the building, I make a hard left and keep heading down the long, tunnel-like hallway, scanning over the two championship banners hanging from the piping.

The first is from 1969 and the second, from last year, my first season as the starting pitcher here at Avix U. I came in freshman year on a redshirt, which meant I was forced to ride the bench and prove I could make the grades required of a college athlete. I was only allowed to practice but not play that first season, so that’s what I did.

I practiced every fucking day, three times a day, with and without the team.

Their then main man knew instantly what was coming, so he did what any smart ballplayer would do and transferred out before his spot on the roster shifted from starting to relief pitcher.

I promised Coach the day I signed on I’d get him the title on that banner, and he promised to do whatever he had to do to get me an MLB contract. He got his, and now that I’m a junior, I’ll get mine.

Once the season’s over, I’ll finally be eligible for the draft, and I will be drafted.

Which is why this tutoring bull, while extremely nauseating and sure to be a horrible fucking time, not to mention time suck, is annoyingly necessary.

Pretty sure Coach said that, too.

I hop up, tapping the blue and gold tapestry, and keep moving, but my steps slow when hushed arguing echoes off the concrete walls.

“Tell me this is a joke?” a girl hisses.

“Does it sound like I’m joking?” Coach Reid, ever the no-bullshitter, counters in a tone far less concerned than hers.

“I have other students. I am a student. I have another job, and I have—”

“Don’t bring any of that in here. He’s priority,” he tells her.

“Priority, wow.” The girl’s voice drops, a little more desperate. “This is the last thing I would have expected.”

“Why is that? If you ask me, I’d think it’s safe to say the concerns you had when transferring to my department no longer exist.”

A chortled laugh follows, and it’s not a happy one. “I can’t tutor Tobias Cruz.”

I perk up when my name is dropped, a smile stretching across my face as I lean against the wall to eavesdrop some more.

“You can and you will.” Coach lays down the law. “As for your time-frame issues, you’ll need to figure out how to manage this and your other obligations or I’ll have student services pull the contract and seek outside tutors who can.”

There’s a moment’s pause, and then she speaks again, “I don’t ask anything of you, but I’m asking you to assign him to another person. Please.”

She keeps going but I tune her out, laughing at how predictable the situation is, and finish her sentence in my head ...

I can’t tutor him, he’s too good-looking.

I focus in again in time to hear her say, “This is unbelievable.”