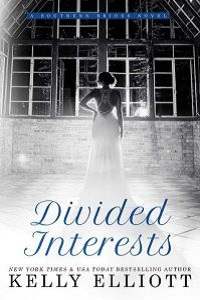 I STARED AT the old man. There had to have been some sort of mistake. I had heard him wrong. My stomach clenched as I let the words sink in.

“I’m sorry,” I said with a bemused chuckle. “I thought I heard you say I was a co-owner of my grandfather’s ranch house here in Johnson City.”

He nodded. “That is what I said, Lucas.”

With a sharp shake of my head, I stated, “This is a mistake, Lou. I’m the only grandchild of William Foster. If granddad didn’t leave it to either of my parents, who did he leave it to?”

The old man attempted to hide his smile and failed miserably.

“Fifty percent of the home located at 4547 Ranch Road 175 has been left to one—” I swore he paused for dramatic effect—“Paige Miller.”

I closed my eyes, let out a soft groan. “Now I for sure heard you wrong. What name did you just say?”

Without opening my eyes, I could hear the lawyer’s humor in his reply. “Paige Miller, formally of Johnson City, moved to Arkansas to attend the University of Arkansas with a degree in International Business with a…”

“Minor in French. I know who Paige is, Lou, and you know I know! Why is she named in my grandfather’s will?”

The old man, who also happened to be my granddad’s best friend, leaned back in his oversized leather chair and gave me a smile. “I’m afraid the only person who knows is your granddad.”

I forced a smile. “That doesn’t help me any, Lou, when the man was buried three days ago.”

His smile faded. “That is true… Where were you again?”

He snapped his fingers. “That’s right. Your momma said you and your girlfriend went there. Heard the girlfriend was expecting a ring. Did you ask her to marry you?”

“No, I did not. Can we please get back to this…mistake?”

“Ms. Miller was in my office two days ago and picked up the keys and a letter your granddad wrote to her.” He pulled out an envelope from the file and slid it across his desk. “This is your letter and your key.” Then he placed a single key on top of the envelope.

I stared at it. If I touched it, I might combust and set the whole damn office on fire.

Then I laughed, rubbed the back of my neck and looked at my granddad’s oldest and dearest friend. “This is a joke, right? Granddad pulling one over on me from his grave because he loved his jokes? I know he adored Paige, and always said I needed to get my shit, er, stuff together, but he wasn’t serious.”

He didn’t crack a smile at all. He actually looked a bit pissed off. “Trust me when I say this is not a joke. William knew exactly what he was doing. Read the letter, Lucas. All the answers you’re looking for start with that letter.” He jerked his chin toward the envelope.

I grabbed it and stood. “Half of the house is mine, the other half is Paige’s?”

A sinking feeling hit me in the middle of my gut. The land as well. Mother-freaking-effer. My first impulse was to sell it. Every time I stepped into that house I thought of her. Of Paige. The woman I now owned it with. Jesus Christ, this was messed up.

“Thank you for your time, Lou.”

As I made my way toward the door, he called out, “Welcome back to Johnson City, son.”

I placed my hand on the door. A part of me grew angry that my granddad had tried to force my hand. The plan had always been for me to go to college, then come back and work alongside my father and granddad in the family construction company. That all changed the summer after I graduated high school. I didn’t want that house or the memories associated with it.

“As soon as I buy Paige out and sell that house, I’m headed back to Austin, Lou.”

He frowned. “That’s a damn shame. We could use a man of your many talents here in town.”

I laughed. The idea that Bianca would even entertain the thought of living in Johnson City was a joke. She was already bitching about staying at the bed and breakfast down the road, which I actually thought was nicer than any expensive hotel we had ever stayed in.

Before the door shut, I swore I heard the old man chuckle and say, “We’ll see about that.”

“PAIGE, SWEETHEART, THANK you so much for coming. William loved you like a granddaughter and missed you so.”

I wiped a tear from my cheek and forced a smile as Lynn Foster placed her hands on my upper arms and gave me a onceover. She’d always done this, for as long as I could remember. When I had walked into the home of Lynn and Carl Foster, my heart had been hurting. I had loved Carl’s father, William, like he was my own grandfather.