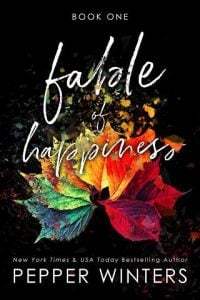 THE DAY I WAS BORN, a curse was put upon me.

That curse grew with me from boyhood to man. I had no mark to prove it. No doctor to confirm it.

A blackness had attached itself to me, and I was cursed.

Because of this fact, I didn’t look upon surprises as favorable. Surprises in my world meant pain and punishment. I liked methods. Rules. Comfortable habits and familiar routines.

So, what are you going to do with her?

My hands balled as I paced outside the cell where I’d thrown her.

That was a lie.

I knew what I should do.

I should kill her because she’d found me. She’d stumbled upon my carefully hidden world. She’d had the audacity to enter my home. To step foot upon my domain.

I glared at the heavy wooden door, dropping my gaze to the rusty padlock that’d continued its role of imprisonment for far too long.

I pulled the key from my pocket.

I opened the door.

I stepped inside to face my enemy.

MY MOTHER USED TO SAY I was blessed.

I was born in the summer, I liked to learn, and I’d had a happy childhood. Well, I had until my dad passed away from a sudden stroke, leaving me and my little brother, Joshua, at the mercy of my fragile mother, who used scorn to patch up her own heavy grief.

But, because I was blessed, the minute Joshua turned eighteen and rented a place with some friends, I moved out of the house too, assuring my mother that I would always be there for her. That I would always answer the phone and forever be her daughter, even if she couldn’t understand why life seemed, in her words, “to favor me and not her.”

By favor me, she meant that by the time I was twenty-three, I’d quit my job as a travel agent and would never have to work for someone else again. I was free of the rat race. A self-made millionaire.

And it was all thanks to a passion that’d started in school and had morphed into a career that provided an ample income to buy my quaint lavender-painted house, squirrel away my retirement fund, and enabled a lavish lifestyle, if I chose to.

Pity that I chose simple things.

I didn’t drink or smoke. I didn’t party or favor expensive dresses or makeup. Yes, I had the latest gadgets in video recording and laptop software, but those items, along with new carabiners, rope, and chalk, were all tax deductible because of my career.

My career that my mother couldn’t understand. That friends from school rolled their eyes at, and other peers glowered at with envy.

I was one of the few women climbers who’d struck gold on YouTube.

A girl with strength in her fingers and flexibility in her body to scale complicated boulders, cliff faces, and technical mountains.

First, it was just the sponsorships. The free climbing shoes and exercise leggings as I won more local and regional contests.

Then it was the appearances. The brief reviews I was requested to give on climbing gyms around the USA led to some larger companies flying me overseas to sample their own routes and walls, quoting me in magazines who’d dubbed me as “The Girl Gravity Can’t See.”

As my notoriety increased, so too did the prize winnings. I had the opportunity to train with elites and enter contests reserved for champions.

I enjoyed all aspects of competition. I liked indoor climbing as well as outdoor challenges. However, my personal favorite was climbing on my own. No spotter. No belayer. No one to catch me if I fell.

One afternoon, I’d left the city behind on a quest to find a waterfall I’d seen mentioned on a couple of climbing forums. For four hours, I’d climbed its treacherous rocks. I almost fell. I made a few mistakes and triumphed on a few challenges. I truly felt as if I was the girl gravity couldn’t see.

I’d loved the experience so much, I’d created a profile online and posted the recording from my camera that I’d set at the bottom of the waterfall. Just a simple recap showing the route I’d taken, the cuts I’d endured, and the time-lapse journey of me scaling moss-covered rocks all while water drenched me.

The light had been perfect on the cascade. The rainbows had been exquisite. The colors had been magical. I’d wanted to immortalize the experience by uploading it.

I’d tagged a few climbing acquaintances, labeled the video “Swimming in the Sky,” and then gone to bed.