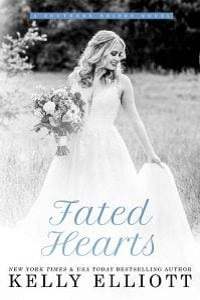 “I’M SORRY, MR. Carter, but all flights out have been canceled due to the snowstorm.”

I sighed but then quickly flashed the older woman behind the American Airlines counter a smile and a wink. I traveled enough to know that if the issue was weather-related, they didn’t have to put you up in a hotel, and I knew things would be booked fast because of the storm. “It’s not your fault. Can’t control the weather, even if you do have lovely blue eyes.”

She blushed and leaned in closer. “We don’t normally do this when it’s weather-related, but I can offer you a hotel room over at the Grand Marshall since it looks like you may be stuck here for at least two nights.”

“Two nights?” I asked with a frown.

I took a quick glance around the airport. Hotels were going to be booking up fast, and the Grand Marshall was a luxury one with a nightclub on the top floor. I’d be stupid to turn it down. I looked back at the lovely lady. “I think I should take that room before they’re all g–one.”

With a grin, she replied, “I’ll get you all taken care of. They always hold a few rooms for us just in case.”

An hour later, I stepped into my room at the Grand Marshall right outside O’Hare Airport. I walked straight to the bedroom, dropped my one bag by the window, shut the curtains, and then face-planted on the bed.

I had been on the business trip from hell, and I swore it was the longest trip I’d ever taken. Considering it was only supposed to be two days, for me to think that showed how messed up the entire thing had been. Delayed flights getting to Chicago. Too much pizza and beer, and meeting after meeting. I hated negotiations, I hated pompous-ass businessmen, and I hated flying. I hated business trips, in general, and I hated being stuck in the frigid north where the temperature outside was cold enough to freeze my goddamn balls off. Not to mention I was hungry. The whole way here in the Uber, I had debated whether I should eat or just go to sleep. Considering I had made it to the hotel alive despite the daredevil driver, I decided to go for sleep.

My phone buzzed and I rolled over to pull it out of the back pocket of my jeans.

“Hello to you too. What has you so grumpy?”

The voice on the other end of the phone was my brother Truitt’s. It was his fault I was stuck in Chicago in the first place. It should have been him here, but he had asked me to do him a favor. Never again.

“First off, asshole, it’s nearly midnight. I’m stuck in Chicago for what looks like another two days if this storm is as bad as they say it will be, and I haven’t gotten laid in at least six months. No…longer. Oh, and I’m hungry as shit.”

“Dude, that sucks big time for you. How did the meetings go?”

“Is that all you care about, the stupid meetings? Do you even care if I’m sleeping in a chair in O’Hare right now?”

Truitt laughed. “Please. I know you, and I’m almost positive you’ve sweet-talked yourself into a hotel room—and not only a hotel room, but most likely one that’s right there at the airport so you can get on a plane at a moment’s notice when they start flying out.”

I sat up and stared straight ahead in the dark. “My God. How is it you know me so well? They put me up at the Grand Marshall.”

Truitt whistled. “How young was the ticket agent?”

Truitt laughed. “It’s scary how well I know you. Now, the meetings?”

With a sigh, I fell onto my back again. I could hardly keep my eyes open. “Truitt, I’m so fucking tired I can barely think straight. I’m so tired I’m not even going to eat. I’ve been sitting in a small, cramped boardroom with stuffy producers, directors, and suits from the network since seven this morning. It’s now almost midnight, and I haven’t eaten, I haven’t taken a shower, and all I want to do is sleep.”

“Fine, we can talk tomorrow, but can you at least tell me—”

I hit End on my cell phone, turned it off, and tossed it onto the side table. I got up and stripped out of my clothes before sliding into the bed. I didn’t even care that I hadn’t taken a shower. I didn’t even care enough to take the top cover off. I was that exhausted. I knew the moment my head hit the pillow, I was going to be out.

The sound of a hotel door opening and closing had me pulling the pillow over my head. Fucking thin walls. How could they call it a luxury hotel when I could hear every damn thing the person in the next room was doing? The couple next door had been having sex for the last hour and had only just stopped. One of them must have left, which would explain the sound of the door opening and closing. Now, it was finally peaceful, and I could get some sleep. I moved my pillow back under my head and closed my eyes.