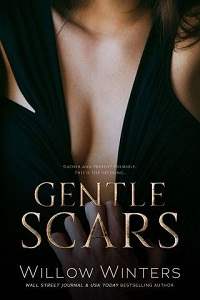 No one is meant to live forever. Even immortals. As a vampire, I knew one day my life would be over. I imagined it would be due to violence.

Not because I fell in love.

“Promise me you won’t take the drug anymore.” Vince’s voice is tight, his plea desperate. The bloodied tears that stain my cheeks fail to stop.

I chose this. I did it for him. For us. If there’s a chance for us to have a real life together, one where I won’t grow old … One where I could possibly have a child … it’s for love. I never asked for a mate. In all my decades, I never felt this deep need.

Just as I never asked to be immortal, and now …

“Promise me, Veronica.” All I can do is slowly nod my head.

I’ve turned into a fool for him. Become weak for him. I would do anything for him.

“I promise.” I whisper the words I know are a lie. No one is meant to live forever and this had to be done.

“I will give you everything you need. I promise you, my love. It could kill you.” I sniffle and kiss the crook of his neck. His gentle embrace brings a warmth to my chilled blood. “I would die without you.”

He says that, but expects me to live when he’s gone from this world. He’ll understand. He must. He’s my mate and he’ll forgive me.

“I will love you forever, Vince.”

The first moment I felt my mate

How the hell did Devin do it? How could he leave his mate after feeling this?

My fingers ball into fists as I stand on the stage, stiff and all but snarling.

A burning shock lingers in my blood, chilling my skin with a cold sweat and willing my limbs to go to her. To my mate. My heart races, adrenaline coursing through me as the pull to go to her is overwhelming. By order of my Alpha, I’m ignoring the instinctual demand, just as he did last year. With every second my feet stay planted on this damn stage, the pit in my stomach grows larger, twisting and churning. My dry throat closes, threatening to suffocate me. The aching need devours me. I’m practically fucking weak and useless.

How the hell did he ever wait for the offering? How could he resist when she was so close and he felt this?

“You will wait.” Devin’s command rings loud in my mind.

My wolf whines, but settles. “It hurts.” My teeth grit as another wave of stinging heat rolls over my body, punishing me for disregarding her. My neck arches, straining against all reason. With my muscles coiled, I fight my instincts. I have no intention of going against my Alpha, but this is fucking torture.

Our telepathic conversation pauses as the young women hesitantly walk across the stage. They reek of fear and anxiety, and the awful stench is a slap in the face. The reverberation of their shoes clicking against the metal stage continues to get faster and faster as more of them scuttle past us. The Authority demands the humans be deathly afraid of the paranormal species. Given my urge to howl in utter agony at this moment, I imagine I could reduce them all to nightmares and lasting trauma if I openly struggled to control myself.

Containing this visceral reaction is brutal. The fear it creates will be rewarded by the Authority, so perhaps there’s a silver lining. The humans’ fear is good for us; not so good for the Alpha’s mate, though. I can smell her dread from here. They call her Grace. Although I can barely focus on her, I’m proud to welcome her into our pack. If she knew more about why these treaties exist and what it means to be chosen, I’m sure she wouldn’t be so damn terrified. But then again, neither would any of the other humans.

A smirk pulls my lips up; I can faintly hear Dom and Caleb’s mate telling Grace something about us having sticks up our asses. The humor relieves the agony for a moment.

“She must’ve met Dom.” I stifle my chuckle at Lev’s comment. Grace’s friend, Liz, isn’t as scared as she should be. Either that or she’s putting on a front. I barely resist the urge to turn my head toward Dom to gauge his reaction.

Caleb snickers and says, “Our mate’s a little firecracker, isn’t she?” I can practically feel his grin. Ever since the two of them felt their pull to her, Caleb’s excitement has been radiating through all of us and his wolf won’t stop panting for her. If he were in wolf form, he’d be drooling with his tongue hanging out of his jaws. Dom’s enthusiasm is dampened by his reluctance to share his mate. I’m sure as hell not jealous of those fuckers. Especially not now that I’ve found my own mate.