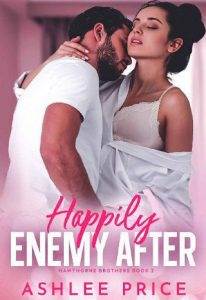 My friend Casey lets out a dreamy sigh while stirring her iced French vanilla latte.

I know she’s younger than me, but I swear she sometimes acts like she’s still in high school instead of a twenty-two-year-old trying to get two degrees.

Still, I glance over my shoulder. I immediately spot who Casey is ogling. I’ve had a few classes with Asher Hawthorne. Even if I hadn’t, everyone at UPenn, let alone Wharton, knows who he is. Son of Winston Hawthorne, founder and CEO of Hawthorne Holdings. Why he needs an MBA I don’t know. I’m sure he already has a sleek office waiting for him along with a slew of talented professionals whose hard work and ideas he can take credit for.

He’s standing next to the counter chatting with another guy while waiting for his order. Dark locks peek from beneath his fitted navy blue beanie. The top button of his charcoal gray Henley shirt is undone, the placket drawing attention to a chiseled chest. Toned biceps threaten to burst through the sleeves that are rolled up to his elbows. The hems of his khakis are rolled just slightly around his ankles, too, giving them a clean look to go with his pristine white sneakers. He knows a thing or two about fashion, I’ll give him that.

Just then, he laughs as he takes off his beanie. The sound travels across the room like a deep rumble of thunder that echoes inside my chest. The lines around his mouth crinkle. His ebony eyes dance. The gold bezel of his watch—probably a Chopard or a Piaget—gleams on his wrist as he playfully ruffles his wavy hair.

I look away and douse the admiration welling up in me with a generous sip of steaming hazelnut cappuccino.

Fine. Asher Hawthorne is hot as hell. That doesn’t mean I’m going to start drooling over him or consider spreading my legs for him like every other female on campus. In fact, I still don’t like him.

Casey lets out another sigh, her gaze still pinned beyond my shoulder. “Wouldn’t you want to have a piece of him?”

“Then he wouldn’t be able to fuck every woman in my class. Or the female professors. Or the research assistants. Or that woman behind the counter preparing his drink.”

Casey nods. “She does seem to be drooling over him.”

She wipes her mouth with the back of her hand, then with a napkin.

“It’s not my fault he looks so delicious. He’s like this sugar-coated, cream-filled churro that has the tip dipped in chocolate and you just want to suck the chocolate and lick all the sugar and—”

I put up a hand to silence her. “Now you’re being gross.”

“And it’s not just looks that he has. He’s extremely rich.”

“Because he was born into a family with lots of money.”

“You mean he’s cunning. He knows just what to say to people to get what he wants out of them.”

“Which just goes to show how smart he is, right? I’ve heard he can solve differential equations mentally. In less than a minute.”

I’ve heard that, too. I’ve seen him do equations on the board with just his eyes. I can’t deny he’s some kind of math whiz. That just annoys me even more. Isn’t it enough that he’s heir to billions and he looks like Henry Cavill? He has to be a genius, too?

“So what?” I shrug. “He only uses his looks, his money and his brains to get women into his bed. Don’t you find that despicable?”

“He already has the world. Why can’t he content himself with one woman?”

“All of us are searching,” I tell her. “But are all of us jumping from one one-night stand to the next? No. And yet that’s exactly what he’s doing. He isn’t trying to see if one of those women is good enough for him. He never intended to keep any of them. They’re just things to him, toys to play with and then throw away like the hundreds of toys he probably had growing up. What person who’s right in the head does that?”

“I bet he isn’t. Right in the head, I mean. Maybe he’s treating women like trash because he feels like trash. Maybe his mother didn’t love him. Or his father.”

“Maybe Asher Hawthorne’s just not capable of love.” I lean back and fold my arms over my breasts. “Which is pathetic, really. He’s just a child. I bet he doesn’t know how to—”

I stop talking because I hear a throat clear behind me. I lift my head and find myself staring into a pair of tar-black eyes.