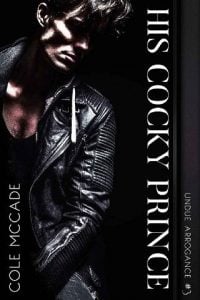 AS ALWAYS, BEFORE YOU BEGIN reading one of my books I’d like to make sure you’re informed of any triggers that may be inherent in the story and that may affect you. Please take these to heart; I don’t list them lightly, and if they’re mentioned you can assume that regardless of degree, if the subject is triggering to you it will likely be triggering in this story. Content warnings for His Cocky Prince include:

A May/December relationship with a very clear power imbalance not just by age, but by social and celebrity status + worldly experience.

A relationship centered around consenting non-consent kink, also known as non-consent roleplay and rape play. Please be aware that this is a central thread in their sexual relationship, and if this kink bothers you, you probably should stop here.

Depiction of an attempted cis male on cis male sexual assault against a main character, involving abuse of power, money, and industry influence to attempt to coerce compliance and secrecy. Note: this is depicted from the victim’s POV at the very start of chapter two. The attempt is interrupted before anything physical beyond intimidation takes place, but you may still wish to be warned before encountering this. I very specifically made this more of an attempt than any successful assault both for the sake of the reader and because I don’t like using sexual assault as a plot device (more on this in the afterword), but even the attempt can be traumatic for some, as it also very clearly upsets the target/victim. Please be aware that the attempt is not perpetrated by the other MC/love interest. All non-con interactions between the two main characters are in the context of willing, consenting kink roleplay with negotiated boundaries and limits.

Discussion of a male director’s secret/whisper network reputation in Hollywood for inappropriate sexual behavior and assault, a la Harvey Weinstein.

Depiction of the aftermath of a physical assault, portrayed in such a way as to give the brief misconception that the injuries are a result of the continuation of the previously interrupted sexual assault.

Repeated threats of violence and physical harm by a main character against/toward a serial sexual offender.

A main character having a brief trauma reaction/flashback in a sexual situation.

Self-referential use of a misogynistic slur congruent with gay slang (b**ch).

Intimations of a violent temper in a main character (this is later addressed in a discussion about perception vs. actuality, but the early conversations/inner narrative about this might make some uncomfortable).

“Daddy” jokes in an age gap relationship that does not involve Daddy/little or age regression, but that may still evoke those associations.

Discussions of limits and boundaries in RACK sex (even if it’s not explicitly called that in the story).

Mentions of homophobia faced by queer actors in Hollywood.

A side character self-identifying as a fujoshi and engaging in what’s basically real-person slash in the story. It’s tolerated with humor and it’s mostly me being cheeky about shite (RPS actually bothers me quite a bit), but just in case the warning’s there.

Mention of an animal hunted and killed in fictional media.

Mention of anti-Asian racism in Hollywood and in other contexts.

A main character kinkshaming and victim-blaming himself, associating kink with fault for his assault.

Mention of vomiting (not depicted or described in detail).

A shitty character shaming a main character for his kink and blaming him for his own assault.

Use of sexually exploitative materials as blackmail.

Pain as a sexual response factor/kink/aphrodisiac.

Scenes of intentional verbal taunting and sex-shaming as part of kink pleasure (verbal humiliation kink, including use of the words filthy, dirty, and sl*t).

Fixation on bodily fluids in a kink context.

A situation with ongoing emotional and professional/occupational abuse from a serial harasser.

Depiction of a highly controlling parent.

Acceptance of death while deep in a (fictional, story-within-story) character's POV in a way that may imply suicidal ideation.

Many of these may not seem like triggers to you, but everyone is different and what may be nothing to you may bring up deeply painful memories or trauma for others. Ignore the ones that don’t apply to you, take heed to the ones that do, and walk away from the book if you need to. I’ll say what I always say, and always will say time and time again:

Take care of yourselves, loves.

THE ISLAND COUNTRY OF SCLATA is a fictional location created for the purpose of the story and is not meant to resemble any existing nation, national identity, or royal family. The northern California town of Asherville briefly mentioned in the story is also fictional.