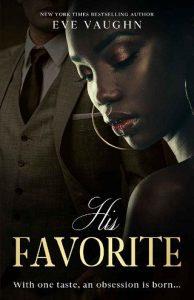 Tamryn Smith is a survivor. She knows the mean streets like the back of her hand. She has what it takes to get out of a tough situation. She’s even willing to kill to stay alive. But when she’s faced with a new threat in the form of a tall, dark and dangerous Irish bad boy, she may have finally bitten off more than she could chew.
Seamus Haggerty was hardened by the life he was born into. Having faced dangerous enemies for most of his existence, he never thought his biggest challenge would be the very thing he swore off: love. But when he lays eyes on Tamryn, he has to have her. And he will.
But what happens when one taste becomes an obsession?

There was so much blood. It coated the walls, her clothing and marinated her skin. Some of it belonged to her, but most of it was his. A sickening coppery scent infiltrated her nostrils, causing nausea to sour Tam’s stomach. She swallowed the bile that rose in her throat. Her hands shook and a chill ran down her spine. She’d seen death before but had never been responsible for it.

The temporary paralysis that had taken over her body slowly dissipated when she realized she’d taken a life. The rapidly stiffing body resting in front of her, stared lifelessly at the ceiling.

Tam scooted away from the corpse unable to bear the sight of it. She wanted to shower and wash away the stench that now clung to her skin. A continuous booming thud reverberated through the room. She froze. Who was at the door?

It couldn’t be housekeeping because it was too late in the day. Besides, a place like this wasn’t that diligent in keeping things tidy, as evidenced by the cockroaches casually scurrying across the floor.

“Open the mother fucking door. We know you’re in there.” The owner of that voice made it clear that his request wasn’t to be ignored.

Frantically looking around the room for other means of escape, Tam noticed the window was covered with bars. With little choice, she wobbled to her feet and headed to the bathroom. Once inside, she quickly locked the door behind her. The window seemed big enough for her to wiggle out of but upon closer inspection, she saw that it too was blocked by bars.

A whimper of frustration escaped her lips and she immediately clasped her hand over her mouth. There was nowhere she could go. Her only hope was for the possible intruded to get bored and leave.

Tam turned off the light, climbed into the tub and closed the shower curtain to conceal herself. Pulling her knees against her chest, Tam went as still as she possibly could.

She nearly jumped at the explosive sound of metal and wood splintering. Tam bit the inside of lip to keep from screaming. The last time she had been this scared was when she’d hide in her closet in hopes that her mother’s boyfriend would be too drunk to look for her there.

Once she started shaking, she couldn’t stop. Tears stung her eyes. Just when she believed things couldn’t get any worse for her, they did…times ten.

“What the fuck?” The deep baritone belonged to a man. A very large one from the sound of it.

“Who do you think did this?” Another deep male voice questioned

“Don’t know, but the boss won’t be happy when he finds out. I could have sworn I heard movement in here. The culprit couldn’t have gotten far. Let’s check the bathroom.”

Tam’s heartbeat increased so rapidly she could hear the blood pounding in her ears.

The jiggle of the door handle was enough to send her anxiety into overdrive. She released an involuntary cry and immediately bit down on her lip harder than before. Tam ignored the taste of blood that now coated her lips as tears ran heedlessly down her cheeks. She prayed her bladder wouldn’t betray her.

But when the bathroom door burst open, that’s exactly what it did. Wetness, dampened the inside of her thighs. Her humiliation and shame were now complete. The light flicked on and she surmised it would only be a matter of seconds before they discovered her.

She silently prayed that death would be quick and painless. Closing her eyes, shut Tam waited. Sure enough, the curtains were yanked off the shower rod followed by a thundering, “Who the fuck are you?”

Tam slowly opened one eye at first and then the other before looking up to see two goons who barely fit in this tiny space. They were roughly the size of grizzly bears made from solid muscle. The men shared a similar aesthetic in their dark suits and both sporting slicked back hair. The only difference between the two was one, possessed a full beard.

She opened her mouth to speak but no words came out.