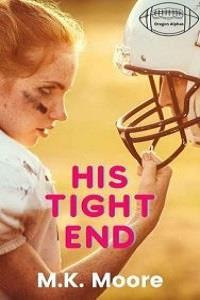 “Listen up, team. This is Sasha Joiner,” Coach Caz says. I look up, and my eyes connect with the most beautiful girl I've ever seen. She’s young. She's not wearing any makeup. She's all freckles and sunshine. Her curly red hair is shoulder length, and all I want to do is wrap a tendril around my finger and see if it’s as soft as it looks.

“Why are you introducing us to a new cheerleader?” My best friend, Blake Paxton, asks from his seat next to me. We are in the first-floor conference room at the team headquarters in Portland. We don’t usually come here, so I am confused about why the team meeting is here and not out in Beaverton at the stadium. See, I’m the quarterback for the Oregon Alphas. Football is my life. As such, professional football has its perks, but the love of the game is why I get up in the morning. I hear a lot of mumbled speculation about who she is coming from behind me. I don’t venture to hazard a guess, though; Coach always has something up his sleeve.

“She isn’t a cheerleader!" Coach Caz shouts. Coach only has two volumes. Loud and louder. He used to play, but a career-ending knee injury led him to coach. No one says anything to him. I am just staring in disbelief. She’s gorgeous, and I want her to be mine.

“An assistant?” Jamal Carter, a wide receiver, shouts from behind me.

“Who is she, coach?” I say, brokering the peace.

“She is your new tight end. You know we’ve had shit luck in that position since Colin Meyers was injured two years ago. I decided to think outside the box. Ask her about her stats.

“I’m sorry, what?” Someone asks from behind me, but I can’t make who it is.

“Rest assured, Sasha is more than able to handle it. I plucked her from her high school team.”

“Hey, guys. I am happy to be here. Just don’t judge me before you see me in action.” I’d love to see her in action, I think to myself.

“Great. Get with Meyers. He’ll show you the ropes. Practice in thirty minutes. Now get out of here.”

Outside in the hallway, she comes up to me. Her floral scent invades my senses. God, I imagine that scent wrapped up in my sheets. Get a fucking grip, man. You can’t fuck her in the hallway. Can I? No, better not. I wouldn’t want anyone to see her that way.

“Nice to meet you, Sasha.” Her name sounds exotic to my ears.

“So what are these ropes you’re going to show me. They already showed me my locker room at the stadium.”

“With the cheerleaders, of course.” The way she says it makes me think that she doesn’t really like that idea. Does she hate cheerleaders?

“And you just graduated from high school?”

“I haven’t actually graduated yet. They plucked me before graduation, but my credits are done. This whole thing is going to be a big PR thing. I don’t think they expect me to actually play well, but I’ll show them that I am more than the first woman, first high school student, etcetera. I just want to play and play well. Can you tell me where I can wait for a ride?” she asks, adjusting the gym bag on her shoulder.

“You’ll ride with me,” I say, anything to keep her near me.

“No trouble at all,” I say, assuring her.

In my SUV, I turn the radio down so that we can talk.

“Great car,” she says, putting her seat belt on.

“Thanks. How old are you?” It suddenly dawns on me that she said she hadn’t graduated high school yet. This could be over before it starts, and I definitely don’t want that.

“Eighteen, barely,” she says, giggling. Thank fuck. I wouldn’t have put it past myself to commit a fucking crime for her. Her little giggle is going to end me, I think, as I adjust my dick as discreetly as I can. No other woman has done this to me before. “Can I ask some questions about the team?”

“Of course,” I say as I pull out into traffic and make my way onto the I-5.

“What are the guys like? I mean, I’ve watched you guys on TV, but that’s nothing really.”

“Coach runs a tight ship, but the guys are great. I’d kick their asses if they weren’t. What were the guys like on your team before?”

“Juvenile assholes. They didn’t like me on the team at first, but those back-to-back state championships we won after I was added to the roster certainly helped. But all in all, they were awful. They were the worst part of the experience, really.”