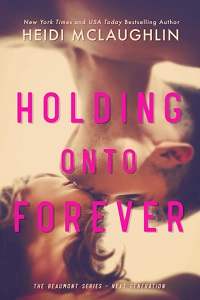 Kyle Zimmerman, one of the top-rated quarterbacks in the league, and Chicago’s most eligible bachelor is holding my hand as he guides me to his car. The schoolgirl in me is trying not to let his presence affect me, at least not on the outside. On the inside, though, I’m all a ball of nerves mixed with excitement. Who would’ve thought a simple assignment would turn into a date? Not me. Not in a million years, but here I am, being helped into his car and anxiously waiting for him to get behind the steering wheel.

And once he does, the sweet scent of his cologne fills the small space. I find myself leaning a bit closer to him so I can inhale deeply without looking like a creeper. Kyle smiles. It’s an ear-to-ear grin with a slight chuckle. I’ve been caught, but he doesn’t seem to care. He leans forward, pulling himself away from me. It’s probably best. We’ve just met and if he kissed me now, I don’t know what I would do.

“Tell me about yourself, Peyton.”

“Is your twin as pretty as you?”

“Impossible,” he replies, never breaking eye contact with me. “What do you know about me?”

“Everything, yet nothing. Your rookie year, you sat on the bench but started your second year. You threw sixteen touchdowns, eleven interceptions and accumulated 3,440 yards. Your completion rate was fifty-eight percent. This year, you’re pushing seventy percent and in line to win the league MVP. You’ve thrown for almost 4,500 yards, twenty-five touchdowns and four interceptions.”

Kyle’s eyes widen as his mouth drops open. “Wow, you had to go and bring up my first year, huh?”

“But what?” he asks, adjusting the way he’s sitting.

I run my cold hands down my pant legs to create some heat. “I don’t know anything personal about you, aside from your age, where you were born, etc.… all stuff that is easily found on the internet. I’d like to get to know the real you.”

“You’re right, so what do you say we head to dinner and talk about who we are away from football?”

Kyle starts his car and pulls out of the parking lot. There’s very minimal traffic waiting to get out the exit the players use.

“Tell me, Peyton. How do you know so much about football?”

“Well, my dad and best friend…”

“Ms. Powell-James, I’d like to see you after class,” Professor Fowler says, calling me out in front of everyone. An email would’ve sufficed if he needed to see me after class. As is, all the males in class all make comments on how I’m in trouble, and the few other females sneer at me. Who knew journalism is so cutthroat? I sling my backpack over my shoulder and take the steps down to where my professor is standing.

“Peyton, you’re one of my best students.”

“Your knowledge of sports, particularly football will get you far.”

“I owe it all to the men in my family.” If it weren’t for my father introducing me to the sport and Liam coming into my life when he did, I could’ve easily fallen out of love with it. Noah was there, of course, but I could’ve become a cheerleader or not had anything to do with the game entirely.

“Well, make sure you tell your family that you’ll be on the sidelines for this week’s Bears game.” The professor hands me a lanyard with the word Media written all over it. Attached to the clip is a press pass with my name on it.

“It’s simple. This Sunday, you’ll be representing the school and me at the game. I expect a full write-up of the game on my desk on Monday morning. Everything you need to know will be emailed to you later this evening. You’ve earned this, Peyton. Enjoy it.”

“Because you’re the best.” He picks up his briefcase and exits through the faculty door, leaving me in the room staring at what is surely going to be my most prized possession until I become an official member of the media. I slip it around my neck and hide it under my scarf, hiding it from anyone who may be lingering out in the hall.

As soon as I push the heavy door open, I spot a group of my classmates. With my head down, I rush by them, praying none of them say anything.

“Hold up, Peyton.” The voice belongs to Donnie Olson, the self-proclaimed God of all things sports. He thinks because he knows more about rugby and soccer, he’s the king.