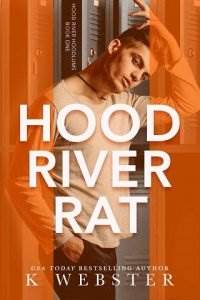 Hood River was supposed to be the change I needed.

An escape from my painful past.

Better in every way.

Everything will be fine.

I’ll keep my head down until graduation and try not to stick out.

College will be here before I know it.

Yet my first day proves to be anything but easy.

The Hood River Hoodlums—our school’s most notorious group of bad boys—have put a target on my back.

Their leader, Roan, hates me.

He calls me Rat.

To him and his friends, I’m a loser who doesn’t belong at their school.

I could pretend I don’t care about their hate.

If only Roan wasn’t so hot.

My nemesis is impossible to ignore…and a secret part of me doesn’t want to.

Here I thought being gay was the worst of my problems.

Turns out, being gay and crushing on your enemy takes the cake.

Guilt is a ravenous beast. One I tend to feed on the daily. Not because I want to, but because it demands it. With every sad smile my mother gives me and each emotional meltdown of one of my little sisters, the beast begs to be fed.

I did this to them.

I ruined my mother and uprooted my sisters.

A shudder ripples through me as my father’s words repeat inside my head. You ripped apart this family, son. You.

Being gay shouldn’t be a problem. This isn’t some era or a foreign country where this isn’t deemed acceptable. It’s on television, movies, commercials, and books. Friends and teachers and family. Someone is gay. No big deal.

But to Dr. English, Vermont’s most revered surgeon, being gay was an embarrassment. Having his oldest child come out to his school and it make its way to the hospital where Dad works was the shock of his life. Never mind the fact that Vermont is really accepting of gays. It was my father who was not. Rather than being a normal fucking human about it, Dad blew up in the worst way. Threatened to kick me out. To disown me. To take away my car, my trust fund, my college savings.

I love her for that.

I also hate me for that.

“What’s wrong, honey?” she asks, sipping from her coffee mug, her hip propped against the countertop in my aunt Karen’s kitchen.

I stiffen, hating that she caught me deep in my self-loathing thoughts. She’s so perceptive, so normally I do everything in my power to keep that from her. My mother has enough to worry about with Charlotte and Penny.

“Nothing, Mom,” I tell her with a bright smile. “Just thinking about school.”

She sets her mug down and walks over to me. Her fingers ruffle my dark blond hair that matches hers exactly. “I can read you better than I can read myself. You’re nervous.”

Her lips press together. “I can try and get you in the private school, but you insist on public. I can manage a way to pay for it.”

Again, because of me.

Mom now works as a bank teller and we live with Aunt Karen until she can get on her feet. Dad will eventually have to pay obligatory child support and alimony, but it’s not enough for Mom to buy us a house and pay for private school. And until the divorce goes through, she’s scraping by just to feed us.

“I swear,” I assure her. “It’ll be fine.” This time, I mean it. I came from a school where I was well-liked and popular. Most of my friends I had since kindergarten. I’m an easygoing guy and tend to make friends without having to try too hard. That’s not what I’m worried about.

“Promise me you’ll let me know if the academics aren’t what they should be. I want you to still have all the same opportunities you had back home.”

“The academics are better at Hood River,” Aunt Karen says in her no-nonsense principal voice. “We’ve gone over this, Kelsey.”

Mom sighs and steps away, shaking her head at her sister. “I know. I’m just worried. They’re starting in the middle of the school year.”

“Garrett knew what he was doing when he gave you that ultimatum,” Aunt Karen tells her gently, stroking her fingers through Mom’s blond hair. “And my strong sister stood up to him, even if it meant a little chaos for her children. You did the right thing.”