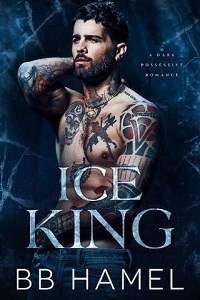 I squint at the grainy image on my work computer screen and my heart starts to race. I lean forward to get a better look, and a sick feeling slithers into my guts.

I think I know that guy.

It’s surveillance footage, and it shows two people, the man standing in front of the woman and pinning her arms up over her head. I think they’re kissing but I’m not really sure. It’s night and the quality isn’t great. They’re in some kind of alley and there’s only a streetlight illuminating them from somewhere out of frame. I frown, getting even closer, trying to make out the soft edges of the man’s face. He looks so familiar, achingly, horribly familiar.

The timestamp on the bottom right says this was taken last weekend, and I try to do the math.

Where was William Saturday night?

I squeeze my eyes shut and lean back, rubbing my temples. My head’s pounding and suddenly the drone of the office air conditioning sounds like a bass drum playing next to my ears.

What the hell is happening right now?

The bizarre email arrived two minutes ago from a random address with the subject line Do you recognize him? along with a link to a picture hosted on a Dropbox folder. It was a very risky click and I’m still not sure why I did it, but that photo has every hair on my body standing on end.

There’s something about the posture, about the way he’s standing and the way she’s leaning against him. It’s tingling my spine like an ice cube down the small of my back.

I nearly jump out of my chair and spin around. Blair’s grinning at me and leaning over my shoulder as she tries to get a look at the photo. Her short, dark hair brushes my cheek and her chic bracelets clatter together as she tries to tap the screen. I quickly close out of the tab and nudge her away.

“It’s nothing,” I say, trying to hide my discomfort. Blair is my closest work friend and I don’t mind sharing basically everything with her, but she can be a little much sometimes and that picture has me on edge. A voice in the back of my head tells me to keep this to myself. That whoever it is in the picture, whatever’s happening, this situation is very wrong. There was something about the guy, his clothes or maybe the way he’s standing, or those shoes—

“Doesn’t look like nothing.” She leans back against the edge of my cubicle. “You reading about those true crime cases again? Was that a suspect? Lay it on me, Sherlock. We’ll solve it right now.”

I force a laugh and wave her off. “Don’t worry, they already figured out who did it. You’re right, that was just another true crime thing, no big deal.” The lie feels terrible like bile on my tongue and I regret it instantly, but I can’t bring myself to tell her the truth.

Who was that guy? And why did someone send me that picture?

“Well, okay then, but you look nervous. Are you freaking out about the meeting?”

I frown at her in confusion and check the clock. “Oh, shit,” I say and jump to my feet.

Blair laughs. “Did you lose track of time again?”

“I’m a very busy person.” I can’t believe I was staring at that stupid picture for, like, fifteen minutes when I could’ve used that time to get some last-minute prep in. I gather up my stuff: laptop, legal pad with my presentation notes, and a handout I designed and printed off. “Are they already waiting?”

“Don’t worry, Egon went over time. He’s trying to get them to sign this weird hardcore band from New York, but who the heck listens to hardcore anymore? They’re, like, a bunch of sweaty nerds screaming at each other and trying to punch their friends in the face. Very lame.”

I laugh awkwardly and hurry toward the conference room. Every last Wednesday of the month, the founder and owner of Drake Entertainment, the notorious Ansell Drake, takes pitches from his talent scouts. Even though I’ve been with the company for nearly a year now, this is my very first presentation, and I can’t believe I nearly forgot it.

That email left me shaken more than I realized.

Blair walks with me. The office is quiet today. It’s usually subdued when Ansell’s around, mostly because people are scared shitless of him. I can’t blame them—Ansell’s got a terrible reputation. More than once, I’ve seen people leave their scheduled pitch meeting in tears because of something he said, and I’m terrified I’m about to be one of those criers. I keep telling myself that I’m ready and I’ve got a great band lined up, but Ansell seems to take pleasure in destroying his employees bit by bit. I’m not sure I can survive his onslaught if he decides today is my turn to be decimated.