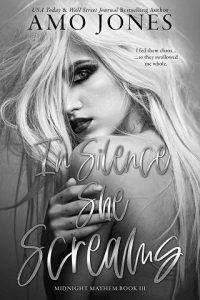 I heard her sobbing before I even reached the end of the hallway. Washed up and fucking tired from traveling, I couldn’t walk past the sound. It was Cartier and the girl never fucking cried. She was tough as shit. When she was five years old, she put Keaton in a damn choke hold and knocked his ass clean out. So, despite the fact that I was about as fucking useful as a nun in a strip club when it came to hashing out girl feelings, I found myself backtracking and pushing open her bedroom door. It was after midnight, my head fucking ached. I wanted to sleep for three days straight before even considering opening my eyes.

My muscles tensed when I saw her curled up on top of the covers of her bed, her arms around her thin legs. “Kyrin, go away…” she whispered softly.

“Fuck that. What’s wrong?” I noticed a few things before she started talking. Like for one, she was in a little party dress made from that glittery shit girls like to wear.

“Nothing. Okay? Nothing.” Her voice trembled, her lips quivering.

Adrenaline started to pump through my veins when I realized she truly was fucked up over something. I walked in and kicked her door closed behind me. Her phone started going off from her desk, and before she could fly up from her bed to grab it, I snatched it.

“Unlock the phone, Chuckles…” Her nickname that I gave her when she was born flew out unintentionally. Apparently, I didn’t know how to say Cartier, so I called her Chuckles instead. It stuck. She hated it.

She shook her head, sitting up straighter in her bed. Her dress was ripped around the edges, her mascara leaking down her cheeks. I ground my teeth and grabbed her around the chin, raising the phone up to her face for recognition. “Ky, please. It’s okay.”

It unlocked and opened onto a message from her best friend.

Car, you have to tell someone about what happened tonight. Please? I’m here for you.

As I read the message, my blood began to boil. I felt the flames of anger burning through my veins. I looked up at Cartier, squeezing her phone in my hand.

I snarled at her. “Someone fucked with you tonight?”

Her lip trembled as she moved her blonde hair away from her face, swiping the smudged mascara under her eyes. I hated it because I’d been fighting my parents left and right to not let her come on tour. I didn’t want her in this. I wanted her to have a mundane life. We all did. Since she was the only girl out of us all, she had to answer to all of us, and what we said usually went. Though she fought us all with her bare teeth.

I took a deep breath and reached for my phone in my pocket. “Name?”

“Name, Cartier!” She flinched, and I would feel like shit under other circumstances, but someone touched my fucking sister tonight and that shit didn’t fly with me. I fucking hated high school.

She spewed off the address and I typed the details into the maps app on my phone. Other times, I would hit up one of The Brothers for backup, but I knew. I knew I wouldn’t need it tonight. “Tell me everything.”

“I-he-he and her, they gave me a drink. They gave me a drink, and I only woke when either of them was on top of me. She would laugh, with a recorder in her hand.” Her words barely made it out of her pain, and by this fucking point, rage was burning through my vision.

I couldn’t fucking see straight. “Do you know them?”

She shook her head. “No. They were just at the party I was at.” Her eyes drifted closed. “I shouldn’t have gone.”

I growled. “Cartier, you should be able to go to a fucking party without some grubs putting their hands on you without your permission.” This is one of the very aspects of life outside of Midnight Mayhem that I will never relate to. A woman can’t wear what the fuck she wants without being judged or touched.

“Don’t worry about that.” Once I hit the underground garage, I looked over the cars we had parked. I knew Dad took the Lambo in to get serviced, so I whacked the keys for the bike off the loop, swinging my leg over, not bothering with the helmet.

The party was over, from what I could see, but the lawn was riddled with Solo cups and empty kegs. “Fucking pigs.” I stepped over the litter and went straight for the front door. Kicking it open, I paused when I saw people scattered around asleep on the floor. Treading through the bodies, I searched all of their faces and looked between them and the photo on my phone. When I didn’t find Ben among any of the sleepy fuckwits on the bottom level, I made my way upstairs. I checked every bedroom—all empty, until I came to the last one.