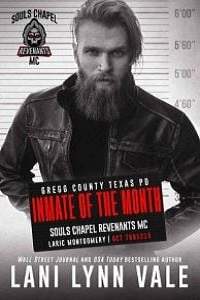 The worst thing ever is when someone new doesn’t understand your brand of humor, so you have to say ‘I’m kidding’ after every sentence so they don’t report you to the police.

Harlow’s eyes narrowed. “Do you think that I want to possibly see my brother having sex?”

“I’m watching it on your computer,” I grumbled. “And I’m not doing it here. It’s weird to do it here. With you. There are a lot of things that we’ve done together, but I’m drawing the line at this.”

Harlow sighed. “You’ll have to have the computer back to me before work tomorrow. I leave around seven. I can swing by your house and get it before I have to be there at eight.”

Harlow worked as a computer tech at a large accounting firm in Longview, about a twenty-minute or so drive from Kilgore where she lived. I, on the other hand, lived in the middle of nowhere, Texas.

The closest town to me was Kilgore, but there was a smaller town called Souls Chapel, Texas that was almost as close. Though, they didn’t have anywhere near the number of things to do or eat as Kilgore did.

Which inevitably made my decision on where to go when I needed supplies.

“That works for me.” I paused. “But I have to be out of there by seven tomorrow myself. I have to run by the office and switch my car out with a new one, then I have to be at the motorcycle club guy’s house.”

She knew exactly who I was talking about, too.

Everybody did at this point. I complained enough.

“I…” A look crossed her face and she jumped up and squeaked. “I’ll be right back.”

I sighed, used to this from her, the abruptness of her needing to use the bathroom.

About a year ago, Harlow started to work out. Then she started to take protein. That protein made her fart and poop like a man.

Let me just say, there are things that I’ve learned about my best friend over the last year that I just never wanted to know.

She got up and picked the computer up before handing it to me.

“Watch it. Save me a thirty-minute trip in the morning.” She handed me the computer. “Let me know. I have to go use the bathroom. It might be a while.”

I snorted at her lack of filter, then looked worriedly at the computer.

I looked at the thumbnail of the video and was surprised by the room.

It was gothic Victorian. Like everything in the video was everything that I loved about an older house.

The man was sitting in the chair with a high back, velvet cushions under his butt and behind his back, and beautiful scrollwork in the wood.

Wow. I wanted that chair.

That was my dream chair.

I was really into the gothic Victorian era, and I wanted one of those old houses on the hill like the Munsters had. Once upon a time, I wanted to be Wednesday Addams.

Now, I’d graduated from wearing only black to adding purple and dark blue to my wardrobe when it was me choosing the color options—sadly, I worked for a new up-and-coming home health agency that specialized in children. Meaning they wanted us to look upbeat and happy. Which meant bright colors like hot pink, green, and cerulean blue.

Before I could stop myself, I clicked on the video and froze.

Because, as soon as I did, there was a woman’s face in the camera.

She was tall, willowy, and had blonde hair that was mostly covering her face. Likely, she’d done it on purpose so that nobody would know who she was.

Once she had the camera in place, she backed away, giving me a clear view of her outfit.

She was wearing a flowy boho-style dress that hit her at the ankles, showing off some gladiator sandals that were absolutely to die for.

She disappeared off screen, and it stayed like that for a good forty-five seconds.

Right when I was about to fast forward, the front door of the house opened, causing my breath to hitch.

My mouth all but fell open when I saw the man in black enter, one hand holding a case of beer, and the other hand holding an opened beer that looked to have been ripped from the package he was holding.

He slammed the door closed with his foot and then walked off the screen again toward what I assumed was the kitchen.

He came back moments later, bootless, and sat down on the dark velvet love seat.