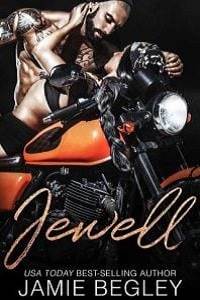 “What are you doing here? I thought you left an hour ago.”

Jewell used her hip to shove a sheaf of unmade boxes onto the metal shelf next to her. “I’m just restocking the supplies, so when work starts back up on the third, you won’t have to listen to everyone complaining it wasn’t done before they left for the holidays.”

“No one will be complaining to me.”

Making a mocking face at Shade, she picked up a roll of bubble wrap, carrying it to the mailing station to slide onto the empty rolling arm. “Not to your face, but they will behind your back.”

“And that would concern me, how?”

“It wouldn’t, which is another thing I’ll have to listen to the brothers complain about when I come back on the fifth.”

“The brothers, not the women?”

Jewell spared another minute to give him another mocking look. “The women would cut off their big toes before they would complain about anything you do. Unfortunately, the brothers don’t care how fine your ass looks in those jeans you’re wearing.”

Jewell didn’t expect Shade to show any amusement at her humor and wasn’t concerned when his somber face didn’t crack a smile.

“Finish up what you’re doing. Everyone will be waiting on us to begin opening the presents.”

“You go ahead. I’ll be ten minutes behind you.”

At the sound of the metal door of the building flying open, both Shade and she turned to see his son staring at them apologetically.

“Sorry, I didn’t mean for the door to hit the side of building.”

The transformation of Shade in his children’s presence never failed to lighten her mood. Despite how miserable she was with her personal life, she could appreciate how happy Shade was with his.

“Mom sent me to get you. She said you’re taking too long.”

“Did she send you because Lily is tired of you and Clint is bugging her to open your presents?”

“No, she wants your help with Mae.”

“Then let’s not keeping our ladies waiting.” Reaching out a hand, he onehandedly lifted John to his shoulders.

Turning back to her, Shade gave her a stern look that showed he meant business. “Hurry it up, Jewell.”

Jewell gave him a jaunty salute. “I’ll be right behind you.”

Alone, she quickly finished the tasks that would help the workers in starting immediately. Her hand was on the light switch when she glanced toward the popcorn machine. She could tell from the slack that it was empty. Forget it, she told herself, her finger tensing as she was about to pull the switch downward.

“Dammit.” Jewell stomped her way into the supply room. She couldn’t not do it. Rider would take an hour to do a five-minute job.

Dragging the large box to the popcorn machine, she went back to the supply room for the step ladder and the box cutter. Cutting the box open, she pulled out the humongous, plastic bag of Styrofoam popcorn. Normally, all she would have to do was lower the bag, but Train hadn’t gotten around to repair the lever that lowered it. So, climbing the ladder, Jewell lifted the filled popcorn bag, raising it over her head to dump the contents inside the machine.

As she did, the metal ring of the machine swung backward and forward. Irritated, Jewell pushed it back, the forceful shove sending the metal swinging again. Stupidly, she tried to show her dominance and shoved it back again. The machine, deciding not to be outdone, started swinging madly. Seeing the thing coming toward her, she tried to block it with her arm, but she had gauged the direction wrong and was hit in the stomach.

Trying another tactic, she reached out to grab the metal circle. At the same time, it went backward. Losing her balance, Jewell found herself taking a nosedive to the empty mail cart below, followed with a rain of popcorn covering her.

Blowing a popcorn out of her mouth, she started contemplating the decisions she had made in her life.

“I’ll be goddamn! Motherfucking shit! Why am I even still here?” she screeched out loud.

Releasing the frustration and dissatisfaction she had been bottling up for the last year felt so good that it was almost euphoric. The overwhelming release of the emotions she had been suppressing had her spewing even more grievances at herself.

“Your ass should be in Ohio, getting laid, which is where you would be if some cockamamie hillbilly hadn’t told you that you would regret leaving!” she snarled out to the empty warehouse. “Guess what, Ginny? I fucking do!” she mocked Ginny’s promise that she would regret leaving Treepoint when she had decided to accept Arin’s job offer in Ohio. Ginny had also promised her feelings for Reaper would change, insinuating she might develop feelings for someone else.