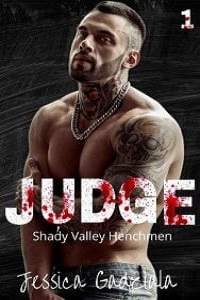 I couldn’t help but wonder if it would be the last time I’d hear the prison buzzer, or the clanking sound of the doors opening and closing.

The smug looks of the C.O.s as I made my way out said “I’ll see you again real soon.”

It wasn’t like I was a changed man. I hadn’t “seen the light.”

And I didn’t need to “find God.” I knew exactly where God was. I just knew my lifestyle was going to send me down to hell. I’d made peace with that.

So there was no reason to change my ways now.

Besides, I thought, as I walked out the doors, slipping the chain I’d been locked up with over my head, I had an offer that was hard to pass up.

There weren’t a whole lot of options in the area for an ex-con.

And it was hard to get by on the outside after so long inside if you didn’t have some cash saved up. Whatever I had hidden away, no doubt, had been discovered and taken by someone else by now.

To the goddamn day.

I served every minute of my sentence.

But at least it meant I didn’t have some fucking parole officer breathing down my back.

Especially since I was planning on taking them up on their offer.

I had no fucking idea who they were or where they came from. All I knew was that they ran guns, and one of them showed up for visitation one day to ‘catch up’ once I got out.

Since I clearly didn’t know the guy, I was going to go ahead and imagine he was looking to recruit new members to his club.

I didn’t know a whole fuckuva lot about bike clubs, but I did know that gun runners made bank.

And that was what I could use.

“You Judge?” a voice asked, making me turn to find a guy standing on the sidewalk outside the prison gates.

“That’s me,” I agreed, making my way closer.

He was a tall, fit, but not bulky guy with black hair, a square face, and features that were either East Asian or Native American, or maybe a combination of both. Black and gray ink snaked up his throat and down his arms, and he had matching cheek piercings.

Slash being the guy who’d visited me in prison. The president of the Shady Valley Henchmen.

“If you’re still interested, that is,” he added, brow inching up.

“I’m interested. Gotta be honest, I don’t know dick about MCs, but I’m a quick study.”

“We didn’t either until Slash got tapped on the shoulder to open a club,” Crow told me, shrugging. “There’s not that much to know. Slash said you came from an organized background.”

And by ‘organized,’ he meant crime. Organized crime. Mob-type shit.

Which had always been thriving in Shady Valley.

“Then you understand the general ranking and shit. Not too much else to know. We wear cuts. Ride bikes. Run guns. Then we spend the rest of the time partying and fucking around.”

“Sounds like the kind of place I’d fit right in,” I told him, following him over toward a black SUV parked down the street.

“Figured riding bitch wouldn’t be your style,” Crow said. “So I bought the SUV.”

And with that, we were climbing in, and heading out.

I hadn’t seen my hometown in years. But, the fact of the matter was, sleepy-ass towns like Shady Valley never really changed all that much. Aside from maybe a fresh coat of paint slapped on here or there and maybe a new mom-and-pop down on Main Street, it was all pretty much the same.

Shady Valley was an unlikely place to find so many criminal syndicates. Located in one of the most rural parts of California, just on the other side of Death Valley, we didn’t have the kind of population or local attractions that would pull people in. That, mixed with the fact that we didn’t have that desirable warm-all-the-time weather like they did on the coast, and Shady Valley had become a bit of a dying town.

There had been a manufacturing plant a couple decades back that had made people flock in. Good hours, good pay, a thriving union. It seemed like the area was up-and-coming.

But when the plant went belly-up, the town damn near collapsed until the prison went up, offering jobs. Not great ones, but jobs that allowed the locals to continue to stay around.

“You gotta be shitting me,” I said when Crow pulled the SUV into an oversized parking lot, the pavement cracked and growing weeds.

“We needed space,” Crow said. “And you’d be surprised what kind of deal you can get on a dilapidated old manufacturing plant.”

“What do you need so much space for?” I asked, climbing out.