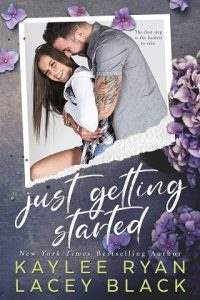 “Could this day possibly get any worse?” I ask aloud, setting my now-cold mocha on my desk and dropping my purse into my desk drawer.

The universe and I are having a day. Definitely not a good one. It started this morning when I was halfway through my shower and the hot water went out. I know I’m on borrowed time when it comes to the availability of said hot water (my landlord installed the world’s smallest hot water heater in my tiny little apartment), but today I didn’t even make it four minutes. I had just enough heat to lather up my lavender-scented shampoo before bam! Cold water. Try rinsing a full head of hair and then have to wash your body with ice water.

Forget conditioning; I just wanted the hell away from the water flowing straight from Antarctica.

If that wasn’t bad enough, the strap on my favorite pair of sandals broke, and I jammed my finger against my closet door. All this before 8:00 a.m.

When I finally managed to get out the door and into my older Honda Accord, I had minutes to spare before I was due to start my day at All Fit, the gym my brother-in-law owns. Unfortunately, the universe was still laughing its ass off at me when I got to the coffee shop. I ordered my regular white chocolate mocha (with extra whip today, since my day is super shit-tastic) and wait for my name to be called.

And wait some more.

I wait so long that the woman at the back of the line with the seven-drink order left before I did. Do you know what happened? Yep. They forgot about me. So by the time they whipped up my super tall white chocolate mocha with extra whip and threw a chocolate scone in a paper bag to make up for their mistake, I was well and truly late. The worst part was I was probably going to have to give up my delicious smelling scone because A) it doesn’t agree with my diet and fitness regimen my trainer from hell has dictated, and B) I’m super late and a fresh chocolate scone might go a long way with appeasing my boss.

The thought of losing my precious (and free) scone didn’t sit well with me as I slipped into my car and turned the key.

That’s when I started pounding on the steering wheel and screaming words that would make Satan himself blush.

My car was dead.

After shooting off a text to my boss, Harrison, I pulled out my trusty walking shoes and hit the pavement. The gym isn’t that far from the coffee shop, but it didn’t help that I got halfway to work and realized the damn scone and my mocha were still in my car. You bet your ass I turned around and walked back to get them. I mean, it was my morning jolt of caffeine and a free scone for crying out loud!

So here I am, nearly forty-five minutes late for work and I feel like I’ve been up since four. Harrison’s door is closed and one of the lines is lit on the phone, so I leave him be. He had a conference call this morning with the assistant managers of all four gyms.

My brother-in-law, Harrison Drake, owns a series of small gyms throughout Missouri. The original location began here, in my hometown of Fair Lakes, several years ago. Over the last few years, he has grown his empire to include training videos, healthy meal planning, and cookbooks, and three additional locations. I was officially hired as his personal assistant in January, after his previous one went all bat-shit cray cray on him, including trying to burn the gym down. She’s currently out on bond, awaiting the trial, with a strict order to stay no less than a thousand feet away from the gym and anyone associated with it.

Harrison is married to my older sister, Gwen. Actually, they’re remarried. The first time ended in divorce, but both realized after the fact that neither of them actually wanted it. What drove them back together? My niece, Sophia. She’s the cutest little four-month-old in the entire world. They were split when they decided for one last go-around of hide the salami, and the result was an unplanned pregnancy between two recently divorced individuals.

At least for them.

I’ve had a shitty day, remember?

And to make it worse, the letter in my purse is like a ticking time bomb, ready to blow a Buick-sized hole in my pleasant little world.

I shovel half the scone into my mouth and turn on my computer. No way is boss man getting this bad boy now. I’ve earned this sweet treat. I take a big gulp of cold mocha and pull up Harrison’s schedule. After his morning managers’ conference call, he has two client appointments before lunch with his girls. Even though he took a big step back to run the business, he still has a few of his own clients who he trains.