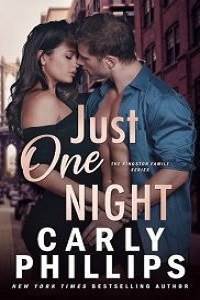 Linc Kingston’s father was a pompous jerk, a philandering womanizer, an asshole of the first order, and he was dead, leaving behind four legitimate children and one illegitimate daughter. That they knew of.

Linc spread the canceled checks he’d found weeks ago across his desk. As he’d discovered yesterday from the private investigator he’d hired, the trail had led to a sister he knew nothing about, and the information had sent him reeling. Who knew what other surprises awaited in the wake of Kenneth Kingston’s death of a heart attack a month earlier?

Picking up a glass of Macallan 18, not his first or even his second, he finished the contents. Without hesitation, he poured himself another with the bottle he’d taken from the bar in the corner of the office that had once been his father’s.

“Slow down or you’ll end up sleeping here tonight,” his brother Xander said. Feet kicked out in front of him, he leaned back in his chair.

“I have a car waiting to take me home. I can get as drunk as I want.” Linc lifted the tumbler to his lips.

Xander groaned. “Look, I get it. I’m not happy about the news either, but it’s not like we thought Dad was a stellar human being. Are you really shocked he knocked up his secretary nineteen years ago and left a daughter to show for it?”

“No.” Linc took another sip. “But I am horrified by the fact that at some point he looked up the kid’s mother, found out the child was in foster care, and left her there.” Linc’s private investigator had tracked down Tiffany Michaels and gotten the story. Linc’s stomach churned at how his sister had been treated by both of her parents.

Xander glanced up at the ceiling, adjusting his black-framed eyeglasses he wore after a long day staring at a computer screen. “I changed my mind. I could use a drink myself.”

With a shake of his head, Xander rose, walked to the bar, grabbed a tumbler, and brought it back to the desk. He picked up the bottle, poured himself a drink, and settled into his chair before indulging in a hefty gulp.

“What do Dash and Chloe say?” Xander asked of their siblings.

Of course Xander wouldn’t know how they’d taken the news. While Linc was dealing with their late father’s estate, the business he’d been helping to run for years, and the paperwork after their father’s death, Xander had been closed up in his home office writing. He was a marine turned thriller writer after his return stateside whose books had been made into blockbuster movies, and he often got lost in his own world. Linc had called him here tonight to fill him in about their sister.

He glanced at the surprise checks he’d found. Everything relating to the family real estate business banking was online. That Kenneth had obviously opened an account to hide these payments spoke volumes about what their father was capable of when it came to his penchant for deception.

“I dragged his ass out of the studio to talk to him. Did it on the phone because, as you know, he’s holed up and working with the band. He listened, said it figured Dad would leave us with this kind of surprise, and went back to work.”

Dash was the lead singer of The Original Kings, a rock band he’d been a part of since he was in high school. After years of playing bars and smaller gigs, they’d been discovered, and their success was massive and worldwide. When home in New York, Dash had a house near Xander’s in the Hamptons fully equipped with a studio and enough room for his bandmates to crash.

Linc rubbed the back of his stiff neck with his fingers.

“Sound familiar?” Linc asked wryly. “Anyway, he texted me later and said he wanted to meet her, so he’s fine. Mellow and typical Dash.”

“And Chloe?” Xander drummed his fingers on the arm of his chair.

“She’s upset. Devastated she had a sister she never knew about and one who obviously grew up in way different circumstances than us.” It turned Linc’s stomach. He didn’t have details of this sibling’s upbringing, but he knew it wouldn’t be pretty. “Aurora,” he said.

“Our sister’s name is Aurora. I think we should start getting used to it.”

A knock sounded on his door, and his personal assistant and best friend, Jordan Greene, walked inside, her dark hair pulled back in a sleek ponytail, her black slacks and silk blouse as immaculate as they’d been this morning. After her upbringing, Jordan prided herself on being able to afford quality clothing and looking her best. No more hand-me-downs from her sister.

“I’m leaving for the night. Anything I can get you before I go?” she asked, as she did every night he stayed later than her. They both worked long hours.