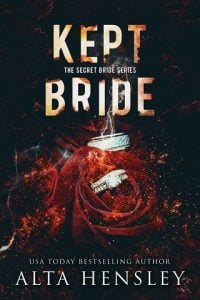 Flames in the sky, smoke in our eyes, and blinding lights—we are no longer alone.

I thought I’d seen fear before, but nothing measures up to what I see in Ember’s eyes now. She’s trapped in a terror I can’t save her from, though I try.

“It’s okay,” I shout above the sirens of the firetrucks and the police cars. “We’re going to be okay.” Even as I repeat the words, I don’t know what “okay” looks like. “Help is here.”

I hold her hand in mine as I wave down the speeding vehicles with my other.

It becomes a blur after that. So many questions, so many people, so many curious eyes looking.

We’re emerging from the ashes, and yet it still feels as if the devil takes hold.

I keep waiting for Richard to march from the smoky landscape, take us both prisoner again, and the chain to never be removed.

I want a gun to defend myself but know there isn’t a single police officer who will give me one.

I want to run up to the burning main house with the firefighters just so I can see the corpse of the monster, known as Richard, sizzle to ash. I want to see his death with my own eyes, but I’m also aware that is not a possibility.

For now, I have to be content that we are saved.

Saved… but not necessarily safe.

Because what does safe really mean?

“I don’t know how many times I have to answer the same questions,” I say, leaning back in the metal chair, feeling it dig into my achy back. “I need to see Ember.”

“Just a few more questions,” Detective Jackson says. “She’s still being questioned too, so if you can just be patient, we—”

“I’ve been patient enough,” I snap. “I told you all that I know, and I also told you that Ember has to be terrified right now. She’s not used to people, and I need to be by her side. It’s been hours, and I’m exhausted. I don’t know what more I can offer. I told you all about that psychopath, about me being chained to a goddamn wall and forced to marry his daughter. I told you every last sick detail. What more do you want from me?”

Detective Jackson looks down at his notes as if he didn’t listen to a word I said and asks, “So, this Ember woman… you said she claims she’s been there since she was a child?”

“Yes,” I say on a heavy exhale. “She’s as much a victim as I am.” I stand up, place my palms on the table, and stare down the detective. “Do I need to ask for my attorney? Because I’m starting to feel that way.”

Detective Jackson leans back in the chair and crosses his arms. “Do you feel there is a reason to have an attorney?”

“You tell me,” I say and then look at the mirror in the room, trying to see whoever is on the other side. But instead, all I see is my reflection.

Wearing clothing they give to inmates, with matching shoes, I look like a stranger. My hair is long and hangs in my face. I look like I’ve lost weight while I was losing months of my life. I suppose I should be grateful for the dry clothes they gave Ember and me when we arrived, but it only reminds me of just how much of a prison I’ve been living in.

“Unless you’re going to charge me or Ember with anything, we’re leaving. So please take me to her. Now.”

“I understand your frustration,” he says. “But the Feds just arrived and are asking Ember more questions.”

“I need to see her. I need to be with her. And like I said, unless you’re arresting us, I expect to be taken to her now.”

Ember hadn’t said a word to me since the rescue. She answered all the questions the medics asked as they tended to our wounds around our ankles caused by the chains. And although she was polite and was free with her answers, it seemed as if every syllable hurt her. I knew she hadn’t spoken to a single soul other than her father, me, and Scarecrow. I knew she had to be so scared, and to be without me had to have her even more so.

I’m hating the interrogation from the police, so I can only imagine how she must be handling it.

“I’ll make a deal with you,” Detective Jackson says as he joins me in standing. “I’ll bring you to her, but only if you can stay a little bit longer to allow the Feds to get what they want.”

I know I don’t have to agree to anything, since we aren’t under arrest, but I also want to help put this nightmare to an end.