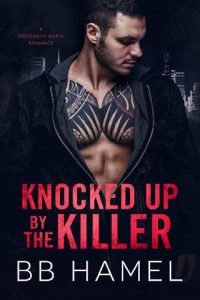 I’m supposed to murder this girl. But first I’m going to take her out to dinner.

The front door was painted black with red trim. I pressed the apartment buzzer and let it ring. A few seconds later, her voice crackled in over the white plastic intercom with faded gray apartment numbers. 2A glowed a faint orange as she spoke.

She sounded cute. I still had to kill her.

“No rush,” I said and leaned up against the black metal railing.

I adjusted the sleeves of my black custom suit and pulled my phone from my pocket. I unlocked it and found a new text waiting for me.

Dante: Do it tonight. Don doesn’t want to wait and let shit get worse.

I grunted, deleted the text, and slipped my phone into my pocket. Damn Leone family was always pushing me to move faster than I wanted to. But it wasn’t their ass on the line if I got caught murdering someone. I’d go down without a word and rot the rest of my life away in prison, and they’d get to stay out in the real world.

I heard footsteps inside the building and looked up at the door pushed open. I stepped back and let my eyes roam up and down my date.

Elise Borghi was a petite girl, maybe a touch over five foot four, with thick dark hair and round brown eyes. Her pink lips were covered in Chapstick and her eyelashes were long and dark. She wore a dark blue dress cut low to show off her surprisingly gorgeous chest and cut short to show off her long, lean legs.

The girl was gorgeous. I knew she was pretty, I mean, I’d seen plenty of pictures of her. But the pictures didn’t do her justice.

“You’re, uh, Tanner, right?” She smiled at me and pulled at her hair, straightening it then letting it loose.

She was nervous. It was cute.

“Right.” She laughed and dropped her hands from her hair. “Right, yeah, sorry. I’ve never, you know, done this before.”

I raised an eyebrow. “Gone out with a handsome man before?”

“Unless I ask you to, right?” She grinned at me and for half a second, I saw the confident little tiger locked inside her.

“Ask nicely, and I’ll do just about anything you want.” I offered her my arm. “Shall we?”

“We shall.” She slipped her hand through my arm and I walked her down the steps. She had a small black purse slung over her right shoulder and her hair bounced as we walked to my car.

I drove a black vintage Lexus from the eighties. It was my pride and joy and even though the thing broke down more than half the time I drove it, I still loved her anyway.

Elise climbed in the passenger side and I got behind the wheel.

“Little Italian place,” I said. “Hope you’re into that.”

“My parents raised me on a diet of pasta, homemade sauce, and wine.”

“Started you from a young age. I like it.”

She laughed as I rolled the Lexus out into traffic. The place wasn’t far but I figured it would be rude to make the girl walk when she was wearing heels that high.

I laughed. “I get it. I know some serious Italian dads.”

She laughed, easy and dazzling. I tilted my head and smiled at her as I made a right and headed down a few blocks.

“Are you close, you and your dad?”

I shook my head. “He passed when I was young. Weren’t too close before that.”

“It’s okay, it happens. How about you? Close with your family?”

I knew the answer to that question, of course. Elise’s family was more than a little famous, especially in my circle. They were the reason for this date and the reason I was going to have to put a bullet in her head later that night.

“Not at all,” she said. “I left home the second I turned eighteen.”

“That wasn’t so long ago,” I said. “You’re, what, twenty-two? I forget what your profile said.”

“I did a couple years of community college,” she said. “But then I got a job and never looked back.”

“I was working at a coffee shop and one of my regulars was this woman who owns a little ad agency here in the city. I was closing up one day and I got to talking to her and we sort of hit it off… and like a week later, she invited me to apply for a job. So I went in, and here I am.”