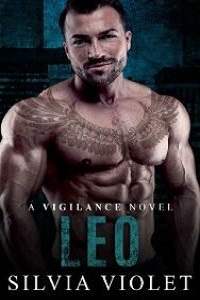 I made it through my first few hours of work at Bacon and Bakin’ without any major disasters. So far so good and much better than my last job, which had ended abruptly when I’d dropped a whole tray of food on my first customers. The café’s breakfast rush was slowing, and I finally had a moment to catch my breath.

When I glanced up from pouring myself a glass of water, I nearly choked. The hottest man I’d ever seen had just walked in. I stood there, frozen, mouth hanging open, watching as he made his way to a table in my section.

Holy fuck. How was I supposed to take his order when all I could do was stare?

He was several inches over six feet with dark hair, a scruffy beard, and the most amazing muscular arms. I took a sip of my water, but it did nothing to cool me down.

Cathy, my aunt and the owner of the café, moved closer to me as she wiped down the counter. “That’s Leo. He owns the tattoo shop across the street.”

“Wow.” I saw tattoos on his forearms where he’d pushed up the sleeves of his sweater. I wondered how much more of him was inked. When I’d moved to Boston a few months ago, I’d noticed Devilish Ink was open again. The last time I’d visited Aunt Cathy, it seemed to have gone out of business.

She grinned. “He’s something else, but be warned. He goes through men like I go through coffee.”

I’d lost count of the cups of coffee she’d downed since my shift started, but instead of sending me a warning, my mind was processing the word men. “He likes men?”

So he wasn’t a relationship guy. I could do casual. It wasn’t like relationships had ever worked for me. I needed to give up on the idea of finding my Prince Charming.

Cathy shook her head as if she knew exactly what I was thinking. “Could you really be satisfied with just one night with a man like that?”

I sighed as I kept staring. I wanted to say yes, but I knew the answer was no.

“He’s more trouble than you need,” she added.

She was right, but he was so fucking hot. If he propositioned me, how could I say no?

“Go on.” She nudged my shoulder. “You’re back on the clock.”

I took a deep breath and willed myself to move.

I started to head for his table, then realized I was supposed to bring water for each customer. I filled a glass, and after one more calming breath, I approached him.

He was looking down at his phone when I tripped on something. What came next seemed to happen in slow motion. I tried to right myself, tried desperately to hold onto the water, but instead, I stumbled forward and fell against his table.

Somehow, Leo managed to jump up just before the glass leapt from my hand and upended all over his seat. I caught the glass as it rolled over the edge of the tabletop, so at least there weren’t any broken shards to deal with.

My kneeling position meant that when I turned around, I was staring right at the bulge in the front of Leo’s worn jeans. The very large bulge. Sadly, after that performance, there was no chance he’d ever show any interest in me.

I slowly forced my gaze up to his face, expecting him to start in on me and hoping he wouldn’t get physical. I had no doubt he could snap me in two.

He didn’t look angry, though. He looked… amused?

“I’m so sorry.” I needed to get a towel to wipe up the mess, but I couldn’t manage to do more than rise to my feet. Even then, I had to hold onto the table because my legs were shaking so hard.

I scurried away feeling like a mouse being watched by a hungry cat.

When I came back to wipe up the water, Leo was still standing. I glanced at the other side of the booth to make sure nothing had splashed on it. “The other side is dry if you’d like to sit down while I clean this up.”

He shook his head. “I never put my back to a room.”

I started to say he could take another table, then realized this one was in the corner. He’d chosen it deliberately. What had he done before reopening Devilish Ink? It couldn’t have been back in business for more than two years.

I’d read enough mysteries and thrillers to know cops like to keep their backs to the wall, but Leo didn’t look like a cop. He looked dangerous, like he might command a troop of mercenaries. Maybe he was an assassin.