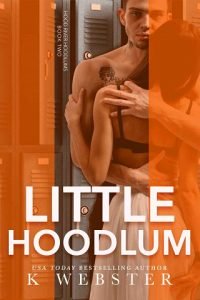 Eyes on the wall. Straight ahead. Ignore the fuck out of this guy. If I blink or wince or even drop my gaze, Hauser and his gang will be all over my ass like stink on shit.

“Yo, pussy kid,” Hauser barks out. “I’m talking to you. Your sugar daddy’s not around to protect you.”

I crack my neck on my shoulders and drag my stare to Eddie Hauser, a big fucker with a penchant for violence. He’s been taunting me ever since he transferred in here eight months ago.

“I don’t need protecting,” I growl. “Especially not from you.”

He pops his knuckles and glowers at me. “The fuck you say?”

“You know what I said, motherfucker.” I puff my chest out and take a threatening step toward him. “Back the fuck off me or I’m going to make you.”

His two goons crowd him from behind. Sure, they’re all three big, and together they’ll easily kick my ass.

Pissed at the world.

They can fucking try me. I’ll go down swinging.

Hauser’s nostrils flare. “Nah, man,” he says to Dave while staring me down. “We were just talking to the kid. No problems here.”

I smirk in triumph, knowing I thwarted another ass whipping. It pays to know people. Dave may be a guard, but he’s a cool guy if you don’t give him shit. He has looked out for me since the day I walked my broody ass into Oregon State Penitentiary.

“Remember what I said,” I call out to Hauser as they start to walk off.

“I’ll tell ya later.” I wink at him, loving how his face turns purple with fury. So much for trying to lie low. It’s goddamn difficult in this place when everyone fucks with you.

Dave chuckles, patting my back as the guys walk off down the corridor. “I told you to stay out of trouble.”

“I try, man, but those assholes make it impossible.” I shrug him off.

“You have to try because you’re looking at an early release. Don’t fuck it up because you can’t keep your goddamn mouth shut.” He shakes his head in frustration. “Come on. You have a visitor.”

My heart thunders in my chest. I don’t take visitors. Not my parents. Not my brother Juno. Not Roan. Especially not Roux. It kills me for them to see me like this.

Today is different, though.

I sent a letter requesting this visit.

A mixture of excitement and dread claw at my insides. I don’t want to have this conversation, but it’s absolutely necessary.

Dave guides me through a series of halls I’ve long since memorized. Prison isn’t so bad aside from the men who are always trying to assert their dominance over you. If you keep your head down, you can get your shit together. I managed to get my GED right away and have been plucking away at some college courses through the prison’s college partner program. School sucks, but when you have nothing better to do, it’s amazing how much you appreciate it.

“I’m surprised you’re taking a visitor,” Dave says. “Have you ever?”

Dave snorts. “Of course. You know this isn’t a conjugal visit. If you start wanking it in there—”

He frowns as he unlocks a door. “Same girl you got yourself in here over?”

“Must be pretty special to deserve such stupid loyalty.”

I follow him into another hallway. He glances over his shoulder at me. “I read your file, Martinez. I know enough. I’m well aware that you don’t make good decisions where she’s concerned. At the detriment of yourself.”

We reach a door and are buzzed in. I’m glad I don’t have to respond to his dumbass comments. He doesn’t know Roux or Roan. No one understands. No one but me. I walk along a bank of plexiglass cubicles with phones attached and small stools bolted to the floor. Most of the criminals are cuffed to the table as they visit, but others like me have the freedom to move our hands.

“Stall nine,” Dave grunts out. “I’ll be nearby when you’re ready to go.”

I give him a nod of thanks before throwing myself down onto the stool, making sure not to look at him. My best friend. Roan Hirsch.

I’m drawn to the sound and lift my gaze. Familiar amber eyes sear into me with the intensity of a fiery volcano. He’s pissed. Understandably so. I refused to speak to him for three goddamn years.

He picks up the phone and nods with his head at mine. I note that his skin is tanned as though he’s spent too much time recently in the sun. His hair is the same, but he’s broader. Based on the way his biceps strain in his Henley, I note that he’s been lifting a lot.