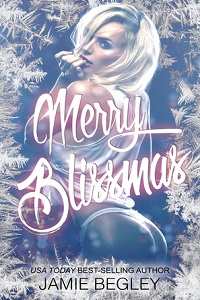 Bliss looked up from the mound of scarves on the display table to the one Ginny was holding up. The pale colors and pretty pattern would suit Willa, but the scarf was lame. Bliss didn’t voice her opinion, however. Instead, she said, “She’ll love it.”

Bliss hated scarves unless they were tied around her wrists. The thought had her turning from the table to cross to the one with the Christmas jewelry display, the fake stones glistening under the store lighting. One in particular with glittering reds and golds caught her eye. It was a golden Christmas tree pendant with shining red ornaments.

Christmas was coming earlier every year. It wasn’t even Halloween yet, and stores wanted everyone to start their holiday shopping.

It wouldn’t be long before the women at the clubhouse put up the Christmas tree. As soon as Halloween was over, Raci would make the men drag the artificial tree out of the attic. Rider would steal kisses as he helped decorate. Train would hang back and do what no one else wanted to do, storing all the boxes away when they were done. Viper and Winter would laugh and tell them they were over decorating the tree. The other members would fuss about it going up so early then move into the kitchen and make apple cider punch, which they would drink. Then the decorating party would become a fuck-fest that would take them a couple of days to recover from.

Bliss blinked back the water that had formed in her eyes. Crying had never done her any good, and she certainly wasn’t going to shed tears in public. That lesson had been deeply ingrained in her before she knew how to talk.

As a child, whenever she cried, it was quietly and efficiently dealt with by her mother. A child’s loud cries or screams could get them thrown out of whichever homeless shelter they had found for the night. Left with three mouths to feed after their father had died from a heroin overdose, her mother couldn’t afford to keep a roof over their heads and went from one shelter to the next. Whatever money she could scrounge together went to feed her own heroin addiction instead of making sure her children had a safe bed to sleep in each night.

She was good at pretending to be clean around others, but her mother didn’t keep the pretense up in front of her children. Child and Family Services stepped in, removing her brothers when she was four, telling her crying mother they needed school and she couldn’t financially care for three children anyway. They promised, as soon as she was back on her feet, she could try for custody again. It never happened. Most of her money went to the drug she shot through her veins, and what was left went to providing them with what food or clothes they needed.

To her dying day, Bliss would remember the sight of her blond-haired, green-eyed brothers, both of them fighting against the workers taking them away from their sister. Neither had cared about their mother, but they had been the ones caring for her, and as a result, they hadn’t wanted to let her go.

Her lips tightened. Brand and Stone were the only ones who had ever loved her, and she had lost them, just as she had lost Shade. Everyone she loved had been taken away from her. She should’ve been used to it, but with each loss, it became harder to remember what it felt like to actually be happy. She became more bitter and felt as if her heart had been packed in ice.

Her thumb brushed over the small necklace. Before she had been thrown out of The Last Riders motorcycle club, she would have pouted until Train, Rider, or Crash bought it for her, even though she could easily afford it herself. Viper, the club president, made sure each of the members could afford whatever they wanted.

Bliss had a hefty amount of money in her savings account, which she refused to touch. When she was old and men no longer wanted her, she would be able to care for herself, unlike her own mother who had made herself available to any man with enough money to support her drug habit.

By the time she was fifteen, her mother had become a club whore for the Devil’s Rejects. When her mother hadn’t returned home for two weeks, she had been thrown out of the tiny room her mother rented at a hotel, and Bliss had to track her down at the clubhouse.

Once there, her mother refused to leave. Stark, the club president, promised her a back room to sleep in at night. He swore to keep the men away from her. She should have known better.