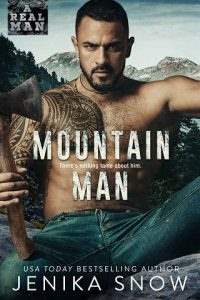 I knew coming back to Mountain Falls meant I’d run into him.

The man I’d lost my virginity to four years ago—on my eighteenth birthday.

Gavin Taylor was a recluse, someone who stayed away from others, because he was that antisocial. He’d built a cabin a shitload of miles from town, high in the mountains; the only company he had was the wilderness that surrounded him.

He was a mountain man in every sense of the word—gruff, rough around the edges, take-no-shit from anyone, and an overall caveman demeanor.

Four years later and here I was, back in my hometown because of a job opportunity. I’d jumped at the chance to come back when I was offered a position in the pharmacy. A part of me missed “home,” missed family and friends. But it was the bigger part of me, the carnal part, that wanted to return, because of him. Gavin.

I’d never stopped thinking about him or that night when I wondered off the trail during a hike and came to his cabin.

I’d been cold and tired, thirsty and hungry. I’d gotten lost, found myself at his front door. He’d let me in, fed me, gave me something warm to drink, and let me sit by the fire. Aside from first name introductions, he hadn’t said one word the whole time, but as the hours passed, as I realized I didn’t want to leave, that there was this pull I had toward him, things... changed.

Then I asked him for something warmer to drink, a glass of that whiskey he had sitting on the coffee table in front of him. I’d blurted out I was twenty-one, a lie and three years older than what I actually was. And he’d given me some without even saying a word, without questioning me.

He’d poured me the whiskey, handed me the glass, and after I finished it, I started feeling a buzz. It was the first time I ever drank, and I was pretty proud of myself for not throwing up. But it wasn’t just the alcohol that had me warming. It was the intense attraction, arousal I felt for Gavin.

That’s when I knew things would move to the next level.

And then I’d been honest, told him I was only eighteen. He said we shouldn’t do this; it was wrong.

I told him nothing had ever felt more right.

And on that night, he’d taken my virginity with so much passion and rawness that I’d never been with a man since.

Because Gavin had ruined all other guys for me.

And as they say, the rest was history.

I pulled myself back to the present, put the last bag of groceries in my car, and shut the trunk, standing there and looking around. A part of me thought I’d see Gavin as soon as I came into Mountain Falls.

A part of me had hoped.

But I knew better. He didn’t like people. And I couldn’t blame him. The town of Mountain Falls, despite how beautiful and picturesque it was, was one of those towns where everyone knew everything and everyone’s business.

No secret was safe in this town. Although, as far as I knew, that night I lost my virginity to Gavin would forever stay between us. Because I sure as hell knew if anyone in this town heard about it, they would let me know.

I got into my car and smoothed my hands down my jeans. I don’t know why I was so nervous. I didn’t even know if he still lived in Mountain Falls. But in my heart, in my gut, I was sure he did.

Aside from the few things I’d learned about him after our encounter, I realized Gavin was just as much of a mystery to me as he was to everyone else. He was a fourth-generation Mountain Falls resident, his great grandfather striking it rich with oil, which was technically passed down. Gavin, being the only living Taylor now and having no heir, owned all of it. He was wealthy beyond belief, but he didn’t live outside of his means. In fact, he owned nothing lavish, as far as I remembered.

God, what was it about him that had me so consumed all these years? I could’ve blamed it on the fact that he’d been my first, but I knew that wasn’t the case. He was the strong, silent type, and I had a feeling he didn’t let people in to know who the real Gavin was.

He was very much the tall, dark, and handsome type who had a mysteriousness to him that intrigued the hell out of me.

Had he thought about me all these years? Did he wonder what I’d been doing, if I’d met anyone, if I’d been with anyone?