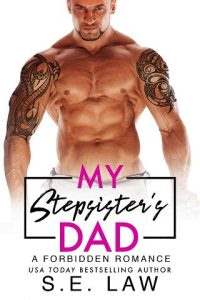 Popping another piece of popcorn into my mouth, I sigh and stare aimlessly at the television across the room. It’s another Friday night and I have no plans. I should be used to it, but I guess it feels pathetic because right now, my stepsister’s humming a tune as she gets ready for a date.

My stepsister Alyssa (or ex-stepsister, more accurately) is singing in the bathroom while she carefully draws her eyeliner and curls her hair. Friday nights are definitely not boring in Alyssa’s world, and sometimes I wish I were more like her because it must be exciting to be go out with a different guy each week. Honestly, it sounds so carefree to whip through a roster of men, all of whom want a piece of you.

But that’s the problem – Alyssa’s Alyssa, and I’m me. I want more out of the guys I date than a good time and a couple laughs. Hell, I demand more! I demand love, passion, and mutual respect, in addition to a muscular physique and handsome, chiseled features. That’s when I roll my eyes at myself because this is exactly why my stepsister’s out with some hot dude, while I’m stuck at home alone. Most men want the fun girl who’s game for anything, and not dour and serious me.

A sigh escapes me. I really need to get a new personality, but how do I do that? Like Lady Gaga says, I was just born this way. Another sigh escapes my lips as I crunch down on a second piece of popcorn with a vengeance. Should I just let go of my morals? Become a bad girl? It doesn’t even sound possible, but hey, perhaps that’s the answer.

I pop another piece of popcorn in my mouth and turn to look at the bathroom door as Alyssa’s singing gets louder. Sheesh, she’s really belting out Phantom of the Opera now, and I giggle. The truth is that I adore my ex-stepsister. Her dad, Cyrus, was only married to my mom for a year, and they were divorced over a decade ago. So really, we don’t have that much of a family connection. Still though, I love my sister. She’s always in a good mood, and is genuinely nice and caring. Even though we share a cramped apartment in NYC, it works because she’s kind, generous, and easy-going.

“How do I look?” my sister chirps, interrupting my reverie. Alyssa pops out of the bathroom with a big smile on her face, her hands on her hips like a model. I smile fondly. I might be stuck at home alone tonight, but that isn’t her fault, and I don’t want to take my sour mood out on her.

“You look too hot for your date,” I say with an emphatic nod.

“You think?” Alyssa asks, staring at her reflection with a frown. “You mean, hot as in temperature? Like I’ll be overheated and sweaty on my date? Or do you mean hot as in sexy mama is going to go wild tonight?”

I giggle again. My ex-stepsister is wearing a cherry red dress that hugs her curvy body and makes her look like a goddess, so it’s definitely the latter.

She giggles before throwing her curly brown hair over one shoulder. Even though we’re not biologically related, we actually look somewhat similar. Both Alyssa and I have curly locks, as well as brown eyes and generous figures. Of course, Alyssa’s better at showcasing her curves and often wears tight clothes. I, on the other hand, wear loose, flowy dresses and sweatpants most days.

But the mention of running club makes my nose scrunch.

“Um, no. Running laps is not for me. I’m not athletic at all, and besides, I’m a loser magnet here in NYC.”

Alyssa looks at me pointedly. “Yeah, that last guy Tommy was pretty bad. But you guys finally broke up right?”

She fixes me with a look.

I pretend to look shocked.

She smiles and rolls her eyes.

“Josie, you know that your break ups don’t always stick. You have a knack for letting losers like Tommy back in when they don’t deserve it! At least make them grovel for a month before giving your relationship another shot.”

Her comment stings, but it’s fine because I know my sister’s right. I talk a good game, and look out for my friends when I can clearly see they’re dating someone who isn’t worth their time. But my own relationships? Well, let’s just say I haven’t been hitting aces.

“I know what you mean, but I swear, it’s over with Tommy. He’s too much of a loser.”

Alyssa looks at me.

“Yeah, but has he been calling you?”