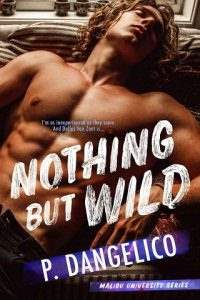 The envelope with my name sits on the bed unopened, the handwriting definitely Beth’s. My head feels like a pressure cooker, ready to split in two from the force of it.

Forgoing the glass, I put the bottle of Jägermeister to my lips for the third time and tip it back. The burn feels good. Productive, even. It means the Jäger’s doing its share to get me where I want to go, which is oblivion. It’s all I want right now and I’ll do whatever it takes to get it.

The roar of the crowd downstairs filters into my bedroom on the second floor. The empty bottle slides out of my fingers and hits the carpet. Following the noise, I step out onto the balcony and climb the railing. Standing on it, I survey the people congregated around my pool two stories below. Among them, I catch sight of Jen and Amy vying for my attention. No need to vie ladies, there’s plenty of me to go around.

My mind snaps back to the letter and my mood goes back to zero. I’m wallowing in the darkness, trying to claw my way out by any means possible. No one wants to be around this version of me. Least of all me. So I push it all down and lock it up nice and tight.

“I am a golden god!” I shout, arms stretched out wide.

We won today. I should be happy, in a celebratory fucking mood. It was an important match against Cal and we made Holloway and his boys bend over and beg for mercy.

The NCAA men’s water polo season is a short one and every game counts when you’re hunting another title and we definitely are. The Malibu Sharks are contenders every year, having already won seven championships, so, you know, expectations and all that.

“Jump, jump, jump,” the crowd chants in return, drowning out the noise in my head.

“Do NOT jump.” Brock yells with his hands cupped around his mouth from amongst the crowd below. “You’ll break your neck, asshole!!”

The look on his face says if the fall doesn’t kill me, he will later. I love the dude but he has no idea what it’s like to be me. To have a family like mine. His is an advantage, mine a liability. One very clear distinctions.

Ignoring his note of warning––as I always do––I step off the railing and tuck into a cannonball. It feels like I’m falling forever, rushing toward a flashpoint––a life changing, unavoidable one. That is, if the fall doesn’t kill me first.

This was a mistake.

Sweet muther goose, this was a big one. Next time I get an idea as stupid as taking a thirty minute Uber ride from my Malibu University dorm to attend a UCLA sorority party in Westwood I should just run my head into a brick wall and save myself the trouble.

Bad Guy by Billie Eilish pumps loud enough to drown out everything else, the heavy bass vibrating under my feet making my toes go numb. It was fun for about five minutes. Now I keep having to shift from foot to foot like I’m in marching band just to restore feeling.

Packed together, barely dressed bodies bathed in neon blue and pink strobe lights sway to the music. Each one more perfect than the next. Had I not grown up in Southern California, this scene would’ve one-hundred-percent sent me screaming from the room. Luckily, I’ve been immunized.

It’s no myth that there are a disproportionate amount of beautiful people living in the Golden State. You either make peace with it, eat your feelings of inadequacy, or move someplace less intimidating. I did a lot of the second and eventually settled on the first.

As for me, I’m not partaking in the dancing. I’m hanging in a dark corner instead. That’s more my thing anyway––watching from a safe distance. From a safe place. Like libraries and study halls. I kill it there––or I used to.

I promised myself I’d make more of an effort this year to put myself “out there,” whatever the flip that means. If you ask me, it sounds like walking a gangplank towards an inevitable death, but whatever, I’m trying to keep it positive so I’m calling it the “less observing, more doing” plan.

For the millionth time, I scan the crowd and get nothing, no Sasha to be seen anywhere. My cousin is the only person I know at this party and she’s been MIA for an hour. Since she laid eyes on Aquaman.

Lesson learned. Never take Sasha literally when she says, “Be right back.”

…or when she says, “You should get the Cat Woman costume. Winnie the Pooh makes you look like a fat orange troll.”

…or when she insists that I need to come to the Theta Halloween party because “It’ll be epic.”