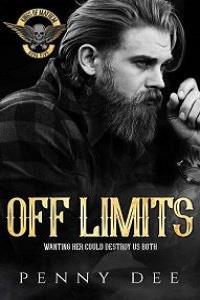 I dug the chalk into the concrete and concentrated hard on drawing the picture properly. I liked drawing on the driveway because it was so big, like a giant piece of paper. Drawing was my favorite thing to do in the whole world. Caleb said I was a good drawer, but Chance and Cade still teased me a lot, saying my pictures look like sticks and drunken rainbows.

I changed my chalk, picking up a pink one to draw the nose and a yellow one for the whiskers.

I was drawing our cat Carburetor. He was a ginger cat with big paws and he loved me the best. For some reason he didn’t like my dad. But that’s probably because my dad wouldn’t let him sleep on the end of the bed like I did… and because my dad could be a little scary sometimes.

When the screen door opened, I looked over my shoulder and saw a man step out onto the porch and light a cigarette. It was Ruger. He was a friend of my Uncle Bull’s. Today we went to church and watched his sister get buried and it was really sad because she was so young, and everyone was saying how terrible it was for someone so young to be taken so soon. She died last week when a car smashed into hers.

She was married to my Uncle Bull and now everyone says he is broken-hearted.

I watched Ruger step off the porch before I turned back to my drawing. Uncle Bull cried a lot when her coffin went into the ground. I had never seen him cry before and it really scared me. He was always so happy and kind. Always smiling, even if he had to wear those dark glasses all the time because he had something wrong with his eyes. They are a weird blue. Bright and light like there was a lamp on inside of them.

That was her name.

She was young and pretty, and she was real nice, too.

But she was dead now.

I looked up at him. He was standing next to me, looking down at my chalk drawings on the concrete. His long hair hung down past his shoulders and he had a bit of hair on his face. I liked Ruger. He had nice green eyes. They were kind and sparkled like shiny green stones.

“Drawing,” I said, turning back to my picture.

I looked up at him.

“My brothers say I can’t draw.”

He raised his eyebrows. “They do?”

I nodded. “They say my pictures look like sticks and they can’t figure out what they are.”

“Well, now, that seems like a mighty unfair thing to say,” he said, taking a draw on his cigarette. “I, myself, do not think they look like sticks. In fact, I think what we have here is some pretty amazing artwork.”

Ruger spoke funny. He and Wendy came from a town far away from here—so far away it was in the very next state over from Mississippi, which I learned at school is called Louisiana.

I liked the way he talked.

“Really?” I asked, unsure. Ruger was nice. Kind. He was the same age as my eldest brother Chance. I had three of them. Brothers, that is. And they were all way older than me. So I knew when someone was pulling my leg. I squinted up at him. “What do you think it is?”

“That there picture?” He pointed at it with his cigarette burning between his fingers. “Oh, I know what it is… that there is some well-drawn, well-thought out—”

“Miss Chastity Ramona Calley, look at all that chalk all over your dress!”

Before Ruger could finish, my mom came storming down the driveway toward us. I looked down at the front of my dress and it was covered in pink and yellow chalk from where I had wiped my hands on it. There was also chalk all over my knees.

I didn’t really know what that meant, but Ruger had said it and I liked the way it sounded.

“Don’t sass your mama, child,” my mom said as she walked over to us. She took the cigarette from Ruger and puffed on it before handing it back. My mom was real pretty. The kind of pretty you saw on the girls in the magazines at Miss Tolliver’s Hair Salon in town. She had long black hair like a raven’s wing, and eyes like the bright blue sky. She was kind but could be mad if us kids misbehaved. “Now get inside, your uncle will be leaving soon and you need to say goodbye.”

I whined. “Can’t I have five more minutes so I can finish my picture, Mama?”

I gave her my best pleading eyes.

Well, that’s what Chance called them.

And they worked too because my mama shook her head and gave me a half-smile. “Suppose another five minutes won’t hurt none. You already gone and got chalk all over it, I s’pose there’s no harm in a little more. Just don’t you be talking the ear off Ruger now. It’s been a hard day for your uncle for sure, but Ruger, as well. I’m sure he’s feeling broken-hearted right now and just needs some quiet.”