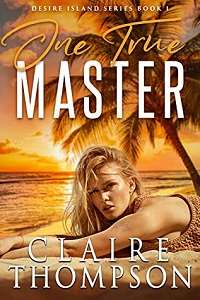 Skylar’s body thrummed with edgy pleasure, heat building inside her with each well-placed stroke of the flogger. She gasped, reveling in the pleasure and the pain as the soft, stinging leather struck her ass, shoulders and back. Sweat slicked her skin, her breath rapidly escalating to a pant. She leaned heavily against the snug grip of the wrists cuffs secured to the chain overhead, a moan escaping her lips as the flogger took her closer to where she desperately needed to go.

Take me there, she silently begged. Take me to that special place.

“Please, Sir,” she gasped, speaking to her fantasy Master. “Don’t stop. I need this. I need you…”

All at once, the lovely, slapping leather ceased, leaving her skin tingling with need, her heart pounding with frustration. “You belong to me, wench,” the man behind her announced in a booming, theatrical voice. “I own your body. I possess your soul.”

Fuck. She’d been so close. Skylar’s eyes flew open in dismay. Wench? Was this guy for real? And, sorry, no. Nobody owned Skylar Moran.

“How dare you command me,” the guy barked. “I decide, not you. It’s time you got on your knees to serve me properly, wench.”

He pressed his leather-clad body against her, his hard-on poking insistently against her lower back. He smelled of cheap cologne and stale cigarettes. Reaching around her, he slid his big hands into her bustier. He groped and squeezed her breasts as if they were rubber exercise balls.

“Scene’s over,” Skylar announced abruptly, turning her body as she tried to get away from him.

Ignoring her words, he pinched her nipples, twisting hard as he leaned down to bite the side of her neck in an annoying way. Maybe he hadn’t heard her.

“I said the scene is over,” Skylar repeated, louder this time. She tried to pull away from him as he continued to maul her breasts and rut against her ass. “Apple,” she yelled, jerking against him. “That’s my safeword, buddy. The scene is fucking over. Let me down. Now.”

To her relief, his hands fell away. He appeared in front of her, his eyebrows furrowed, his mouth downturned. He was a good-looking guy, tall and well-built, though his handsome face was now twisted into an ugly snarl. “What the hell?” he demanded, glaring at her. “I’m the Master, you’re the sub. You don’t get to end the scene. It’s over when I say it’s over.”

“Is there a problem here?” Pete, one of the club owners, appeared suddenly beside them. Thank goodness.

“No,” the idiot snapped, not looking at Pete. “Everything’s under control.”

“Yes,” Skylar said at the same time. “This asshole is ignoring basic club protocol. We agreed to a flogging only—no physical contact. I said my safeword, but he won’t let me down.”

“Fucking prick tease,” the jerk snarled under his breath. Turning to Pete, he said, “I didn’t realize this club was full of posers and wannabes. I’ll take my business elsewhere.” In a huff, he grabbed his gear bag and stalked away.

“Keep going,” Pete called after him. “Right out the door.”

He turned his attention back to Skylar. “Sorry about that,” he said as he reached up to release her cuffs. “You okay?”

“Yeah,” Skylar said. She adjusted her bustier to cover herself. “Thanks for stepping in.”

“No problem. He won’t be bothering you anymore. As you know, we have zero tolerance for bullies.” He looked her over. “You sure you’re all right? Do you need some aftercare?”

Skylar shook her head. “No permanent harm done. He was actually pretty good with the flogger.” She grinned ruefully. “Too bad he thinks that by calling himself Lord Evil and carrying a whip, he has carte blanche to do whatever he wants. Though I don’t know why I’m surprised.” She sighed. “There are all too many Lord Evils out there pretending to be Doms.”

Pete grinned and shook his head. “Ain’t it the truth? Though there are lots of good people dedicated to safe, sane, consensual play, we still get our share of bullies dressed up in leather, with no real clue what they’re doing.”

He glanced at the large gold watch on his wrist. “It’s about time for the raffle drawing. You bought a ticket, right?”

Skylar bent down to retrieve her black leather miniskirt. She pulled it on over her thong panties and reached back to zip it up. “I did,” she replied as she hoisted her gear bag onto her shoulder. “It sounds amazing. Is that place for real?”