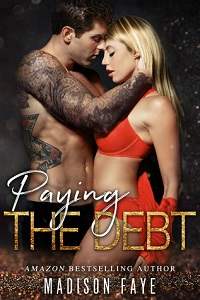 My heart races and my knees knock — literally knocking together — as my eyes drag up to the huge, massive wooden door. The house is enormous, even by Malibu standards. All glass and exposed beams — sexy, lavish, huge, and expansive.

Some people come to Malibu — the shining jewel on the crown of Los Angeles — to seek their fortunes. But most are here to show off the fortune they already have. I mean, every house on the drive here is easily pushing twenty million a piece, with another couple million in cars in the driveway or boats out on private marinas.

But this house trumps them all.

I’m not here to seek my fortune, and I’m certainly not here to show off, since I don’t have any fortune to speak of, at all. I’m the opposite of rich — not just poor, because “poor” would be an improvement than the current state of things for me. No, I’ve moved beyond “poor” into something worse.

Not mine, but now it’s mine to shoulder. Mine to bear. I swallow, glancing back at the driver. As scary as he was on the ride over here, he’s at least a face I know, even if he didn’t speak a word and hardly even looked at me the entire way over here. This time is no different. The hulk of a man stands motionless beside the Bentley, impassive as the door I stand in front of, his shaded eyes not meeting mine.

I have no idea what to expect beyond these doors. Servitude? Prison? Torture? I shiver, my heartbeat racing and my innards turning to jelly as the weight of the reality of this hits me. Because as of right now, I belong to a monster.

I’ve never met Jagger Kovac before, but I of course know of him. Most people might not, truth be told, but in my house, the name is like the Pope. Mr. Kovac operates in the shadows. He’s the boogeyman — the man pulling the strings for most of the syndicated crime in California, if not the entire western sector of the United States, after taking over from his uncle a few years ago.

He’s not a gangster — not one of those people you hear about, or see in flashy blingy cars, or read about in the papers when they get caught.

Jagger Kovac is above all that. Filthy hands that never get dirty.

My father is one of the underlings — a low level drug pusher, not to mention a mean drunk, a gambler, and a frequent and sore loser. And that’s why I’m here — a bet. A damn gambling table bet that he was stupid enough to get into with Jagger.

With me as the prize.

No, really. My father loses a stupid poker hand, and now I belong to Jagger Kovac. Payment for a debt.

I’m shivering again at the thought when the door swings silently open in front of me. A demure, quiet older man ushers me inside the enormous foyer — the doorway inside flanked by two towering indoor palm trees. From where I stand, I can look through into the massive living room, and out beyond it, the sparkling azure of the Pacific Ocean glittering in the So-Cal sun.

The butler, or servant, or whatever he is, says only those four words before he gestures with his chin, leading me through the house into the living room. The view is striking in here, and I’m practically dragging my jaw across the floor when he nods at a chair overlooking the view by the window — indicating for me to sit.

I nod quickly, demurely, trying to act as if this is something I do all the time. Like arriving at gorgeous, palatial houses because the mob bosses who live in them now own me is a regular thing for me. The butler doesn’t meet my eye though, merely nodding at the chair and waiting for me to take a seat before taking his leave.

The house is silent, and I can feel my heart racing all over again as I look out over the water. My hands smooth the cream-with-pink-flower-print sundress I’m wearing down over my thighs. It’s the nicest thing I own, and for whatever messed up reason, something inside of me wanted me to look nice for today.

We’ve never met, but again, I know who he is, and I certainly know his reputation. Ruthless, brutal, and dominant. Jagger Kovac runs the empire he controls with an iron fist — demanding loyalty and obedience like a king of an ancient land. And when even mean, hardened lowlifes like my father and his friends are scared of the man, you know it’s more than just rumor and reputation.

That’s the part that should terrify me. It’s knowing all that about the top man in a vast criminal empire that should have me trembling in fear, or crying, or begging for mercy. But there’s another part of Jagger Kovac, and it’s not stories I hear from my father’s drunk, drugged up friends. It’s not from reputation as a fearsome, domineering crime boss.