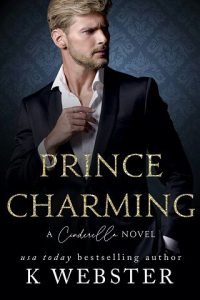 I’m posing like a goddamn Versace model to please my insufferable mother when I’d rather be playing naughty games with her.

My obedient, dirty girl who gets off on the same depraved shit I do.

I just have to make it through this bullshit first.

Tilt your head a little to the right. No, a bit more to the left. Angle down slightly. Stare intently into the camera. Do the serious scowl thing again. Now switch it up and give us a smirk.

This is more Perry’s scene. Strutting around like a rooster so everyone will admire him. It’s a waste of my time to preen in front of a camera when I could be doing something more productive. One cursory glance of the courtyard tells me either he’s late or choosing to avoid this shitshow. I’ll gripe his ass out later for bailing on me.

Smile, Mr. Constantine. I said smile, not grimace. Are you ill, sir?

This goes on for eons. Mother takes great pleasure in my displeasure based on the sly grin curving up one side of her lips. It’s times like these, despite me being a grown-ass man, I wish my father were here to intervene. He was always the warmer of our two parents and seemed to be one of the few who could thaw her out. After the first half hour of indulging Mother with photographs, he’d have pulled me aside for “business.” We’d have hidden out until the party started, cracking open a sixty-five-thousand-dollar bottle of Louis XIII Black Pearl Cognac as we enjoyed a few moments of silent bliss.

The bitterness of losing my father rears its ugly head. My spine goes rigid, and my scowl deepens.

That’s the look. Right there. Money shot, sir. Perhaps narrow your eyes a bit. Show them you mean business.

My phone buzzes in my pocket. I itch to pull it out and take the call. The pictures Ash sent me of her all dolled up in the gown were breathtaking. It makes me crave to dirty her up and ruin her. I’d been about to tell her that too when I was dragged back to the photoshoot where I’ve been miserable ever since. Knowing my spoiled girl was expecting “endless amounts of praise” when I haven’t had an opportunity to shower her with it yet or even send money for the photos sits in the pit of my stomach like a lead balloon. If it weren’t for my need to put on a good show for the public, I’d have shut this circus down already. I didn’t exponentially grow my father’s company since his death by being stubborn or obtuse. No, I did it because I know the necessary games that must be played. Agreeing to a magazine spread that showcases the power the Constantine name possesses with my smiling face and expensive suit on the cover is just one of those moves that must be made in order to stay on top. Sometimes the ones beneath me need a reminder of the force behind the dominating name.

When the photographer stops to look at the settings on his camera, I pull my phone from my pocket. I have a missed text from her and one from Perry.

Ash: Winston, I’m sorry lover, but I won’t be able to make it to the party. While it was lovely using you for your money, I won’t need it anymore. My brothers will look after me now.

And even though I haven’t rewarded her yet like she craves, she wouldn’t jump to such a harsh reply.

The girl is practically in love. I finally gave her the fucking she’s been begging for and spent the night with her. It means one of those little triplet shits thought it’d be funny to pretend to be her. Irritation spreads across my flesh like a fever, scalding and dizzying me. If I hadn’t invited the entire Mannford clan to the birthday ball, I’d be a little worried about her being with them. But, since Dr. Mannford is almost as reliable as my mother when it comes to social appearances, I shelve my concern for now because everyone will be here soon. I’ll refrain from texting her back in case one of those dickheads took her phone. I read Perry’s text next.

Perry: Something came up. I had to run out, but I’ll return shortly. I always got your back, Winny.

His words strike me as odd, but I also find a sense of relief in them.

“Sir, could you put your phone away? We still have a few more shots,” the photographer calls out in an exasperated tone, distracting me from Perry.

“I’m sorry,” I rumble, piercing the man with a hard stare. “For a second there, I thought I was Winston Constantine who owned this entire goddamn city.”