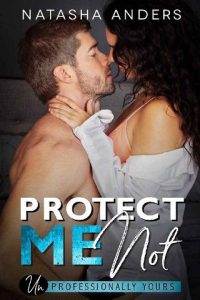 He wouldn’t stop staring. It was unsettling. Even though Victoria—Vic or Vicki to family and friends—Hollingsworth had asked him to keep his distance, those unnervingly beautiful eyes remained trained on her.

And her friend was starting to notice.

“So that’s his job? He stares at you while you’re just living your life, doing your flower stuff? Eating? Entertaining? What about pooping and peeing? Is he there for that as well?” Bella, her best friend, asked while stirring her strawberry daiquiri with a curly straw.

Bella and her boyfriend had been temporarily working in Australia the last eighteen months and this was the first time she was around to witness Vicki’s new normal.

Vicki rolled her eyes and jabbed at her own drink—a frozen margarita—with a straw, trying to break up the tightly jammed ice at the bottom of her glass.

“I thought Miles would have come to his senses by now,” she said, referring to her older brother. “But it’s been more than a year, and he still insists that I need a bodyguard. It’s so embarrassing. And now that Miles is out of the country, he’s gotten even more overprotective. One little break in…”

“To be fair you said there had been other incidents in the neighborhood as well, Vic. And it wasn’t a break in, it was a store invasion. You were attacked.”

Vicki shuddered at the recollection. Last year, a couple of guys in balaclavas had stormed into her tiny flower shop in Kensington. They’d roughed up Vicki and her manager—Linda— before making off with all the cash in the register. The robbers had also taken their electronic devices, Vicki’s engraved silver locket—a twenty-first birthday present from her other brother, Hugh—and Linda’s charm bracelet. There had been similar incidents at other shops both before and after their robbery. But, thankfully, after a short crime spree, the culprits were caught and most of their valuables were recovered.

Yet Miles—seriously ill at the time—had freaked out and had sicced close protection officer, Tyler Chambers, on her. And Tyler took his job seriously—Vicki couldn’t even use a public restroom without him checking it out first. So embarrassing. And so very restrictive. Vicki hated the close scrutiny. It was invasive. But Miles refused to see reason.

“Yes, and I told him I’d be happy if he wanted to beef up my shop security or something. But nope, he insisted that I need personal protection practically 24/7.”

“What happens if you meet someone you want to…you know?” Bella pumped her index finger into the hole she’d created with the thumb and index finger of the opposite hand, and Vicki laughed and groaned at the same time.

“Please, it’s hard to meet a decent guy when you’ve got Mr. Strong-and-Silent floating around you like a bad smell at all times. I’ve been on a couple of dates but none of them ended well. And he practically drove Sullivan off.”

Okay, that was a little unfair. Her kind of ex—Sullivan didn’t believe in labels and had shunned the boyfriend title—had had one foot out the door for the entirety of their three month “relationship”. Vicki knew that he had mostly used the whole bodyguard thing as an excuse to bail. It also hadn’t escaped her notice that his interest in her had waned significantly once she’d stopped paying for his meals and drinks.

She hated it when Miles was right about the “freeloaders” she dated and had happily blamed Tyler’s intrusive presence for Sullivan’s departure.

“I don’t want to talk about him anymore. It’s bad enough having him around all day. I just want to catch up with my bestie tonight and have a fabulous time.”

“I’ll drink to that,” Bella agreed, setting aside her cocktail to lift the tequila shot she had ordered earlier, waiting for Vicki to lift hers. Vicki eyed the drink askance—she wasn’t too big on straight, hard liquor, and she didn’t often get wasted. Then her eyes drifted back to where Tyler sat. For once his attention wasn’t on her, he was scanning the crowd grimly.

What the hell? Might as well take advantage of having a bodyguard. It was actually kind of reassuring to know that she could let loose for a change and be perfectly safe.

She lifted her shot glass and her friend’s smile widened.

Bella licked a sprinkle of salt off the back of her hand and twinkled at Vicki, her eyes shining, her teeth gleaming, a spark of the familiar mischief that Vicki had missed so much, in her eyes.

“Cheers, all m’dears,” she began, and Vicki laughed before joining in, “We don’t have no fears. So, kick up the gears and bring on the beers!”

They squealed and threw back their shots before sucking on the provided lemon slices with matching grimaces.

“Pubmeister, another round if you please,” Bella commanded the barkeeper, with a soggy grin, her eyes streaming after the shot, and the young man complied immediately.