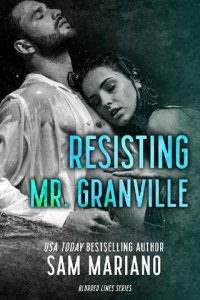 I found love where I wasn't supposed to find it...

The night I met Mr. Granville, he was slipping out of my mother’s bedroom.
She was passed out drunk and I was on my own, but that was nothing new. It wasn’t even the first time one of her boyfriends looked at me for a little too long—just the first time I felt anything like interest in return.

My mother and I had never been close, but I knew I had to pretend not to notice his hot gaze lingering on me when he was supposed to be there to see her, had to resist the temptation to lap up all the attention he offered me.
Until the one night I didn’t.

After they broke up, I thought I’d never see Milo Granville again.
But my less-than-impressive grade in chemistry had me striking a deal with his brilliant son: he would help me bring up my grade, and I would pretend to be his girlfriend so he could get the attention of the girl he actually liked.

Resisting Mr. Granville is a full-length standalone forbidden romance. It is not a dark romance, though it does contain some dark and sensitive subject matter. Refer to the author's note in the beginning of the book for additional details.

Please don’t be the one to open the door. Please be at work.

I hold my breath as a tall, dark, and handsome shadow grows larger on the other side of the frosted glass. A chill passes over me as I wait on the front porch, one that has nothing to do with the nippy fall weather.

I suck in a breath as the handle turns.

I had to muster every bit of courage to come here tonight, but whichever one is on the other side, I won’t let him see my discomfort.

When the door opens, my heart sinks down into the pit of my stomach.

The sexiest man I’ve ever encountered.

The man who nearly took my virginity before I came to my senses and kicked him out of the apartment.

I swear I can see the memory of that hot summer night reflected in his ice blue eyes as he gazes at me from the doorway, his pitch black hair carelessly swept aside in an effortlessly handsome style, a dimple in his cheek from that up-to-no-good smirk on his face.

“Well, isn’t this a nice surprise.”

I pretend to be unaffected as I tip my chin up just a bit and tell him, “I’m here to see your son.”

His lazy smirk doesn’t leave his face. If he’s bothered by it, I certainly can’t tell. “Which one?”

His voice is dry and suggestive. I sense an implication that I’m so easy I could be here to sleep with either of them, even though I’ve never slept with anyone. Even though he’s the one who came over when he knew my mom wasn’t home, who offered to help me with my homework one night and started touching my thigh beneath the table.

Of course, I brushed it away.

He wore me down, though.

Movie nights with my mother right there on the couch on the other side of him, but he’d let a daring finger caress the outside of my bare thigh beneath my nightgown.

And then the night she worked late, and he came over early and caught me coming out of the shower.

The way he stopped in the hall and we locked eyes.

The heat that spread through me instantly as I stood there naked beneath the towel, my hair piled carelessly atop my head, my pussy damp from more than the remnants of shower water.

He walked toward me with sure steps. It was wrong what he was doing, but I couldn’t muster the strength to stop him as he took the towel out of my hands and opened it up. As his gaze raked over me there in the dim hall lighting, appraising every glistening inch of my naked body.

I was also on fire, gripped by lust I’d never known before. When his massive palm covered my breast, I couldn’t breathe. When he walked me back into the bedroom that belonged to my mother and shoved me back on the bed, I didn’t ask him to stop.

I could have. I’m sure he would have.

But since I didn’t, he knelt on the floor and spread my legs. His mouth latched onto my pussy and every last bit of decency fell off of me with the same ease as the towel we’d left behind on the hallway floor.

He ate my pussy with abandon, gripping my thighs so hard I had bruises the next day. I experienced pleasure I’d never felt when I touched myself in bed at night, and after he made me come on his face, when I was lying on my mom’s bed with my heart pounding, my body weak from release, I didn’t want it to stop.