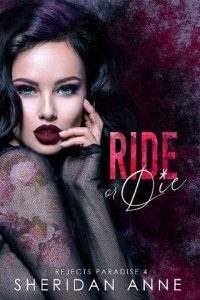 Tears well in his pathetic eyes as he stares up at me, silently begging me to spare his life, but I’m not about that shit here. I’m Dominic Fucking Garcia; I’m un-fucking-touchable. No one gets away with turning their back on the Widows. No one.

He knew the rules. All the fucking Widows do. My father ran a tight ship, but I’m not him. He used to let his men run wild; he used to let them get away with all kinds of shit as long as they came home at the end of the day. But loyalty means something a little different to me, and unfortunately for this fucker, he don’t got it.

I crouch down, studying his face and taking in the black widow tattoo that sits just below his eyes. He doesn’t deserve our mark. He’s a traitor to his family.

The light of the small warehouse flickers above and sends shadows soaring over his already terrified face. I love that fucking flicker. It’s why I use this warehouse. There’s something about a flickering light that sends an already scared man into overdrive. Maybe it’s the small buzz and zap when the light finally gives out and sends the room into darkness. It could be the way that it slowly rocks from side to side as the breeze comes in through the back door, casting shadows back and forth across the warehouse, playing mind games.

I grin as the light flickers back to life. The fucker looks absolutely terrified.

What can I say? I’m all about the dramatics.

Murder isn’t something to take lightly. If you’re going to end someone and send them to the darkest pits of hell, then it’s always best to do it with a little terror in their system.

Fuck, I can only imagine what someone on the outside looking in would think of me—that fucker needs therapy. They’d be right. I’m all sorts of fucked up, and it only gets worse, but what’s more, I fucking love it.

This is exactly what my father wanted for me, and it’s exactly what I took. I’m a fucking king and no one will take that away from me. I’m a god among my men, I’m a monster to the outsiders, and feared by the enemy.

No one can touch me.

“Come on, bro,” Kairo’s soft whine comes from the back of the warehouse, killing my vibe. “You've been playing with him for hours. Get it over and done with so I can get home and find a tight pussy to sink my dick into.”

Always thinking about his fucking dick.

My jaw clenches. Had that been anyone else interrupting my fun, they’d be on the ground beside this traitor, ready to hand over their life. Kai is my boy though, my best fucking friend, my brother, and my second. There are only three bastards in this godforsaken world that could get away with this bullshit—Kairo, Sebastian, and Elijah.

They’ve had my back since day one. They've witnessed all the bullshit and know me better than I know myself. They’re the reason I’m not rotting in jail; they’re the reason my fucking father didn’t rot in jail. Without them, I don’t know where I’d be. They reel in my crazy. They think they know just how far I’ll go, but they don’t. If they did … fuck. I don’t even want to think about that.

If they knew the shit that I did, they might just turn their backs on me too, and that’s a blow that I wouldn’t be able to come back from.

I groan and ignore Kai’s comments. He needs to live a little; he’s such a fucking robot. I swear the guy’s never allowed himself to have just a little bit of fun.

Keeping my eyes on my traitor, I pull my knife and bring it toward the fucker’s black widow tattoo. He doesn’t deserve to wear our mark on his skin.

His eyes zone in, carefully watching the tip of my blade. “You fucked up,” I murmur, my voice low and threatening.

The front of his jeans darkens with piss, and I scrunch my face in disgust. There’s nothing worse than a man who can’t handle fear, and judging by the shame that flashes on his face, he knows it. He’s not worthy of being one of my men. Had Russo been the one to take him, this bitch would have squealed in seconds. He would have told him everything there is to know about Dominic Garcia and the Breakers Flats Black Widows, and that shit is unforgivable.

I slice the tip of my knife through his tattoo, making a point that he doesn’t belong. “You wear this tattoo with pride, yet you’re fucking the enemy,” I say, watching as he flinches with the sharp sting of the knife.