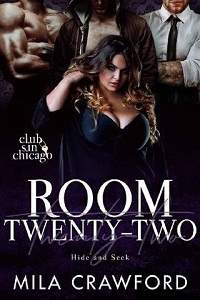 “We warned you, Kevin. We told you if you touched her, we’d kill you.”

Kevin stumbles back, his eyes consumed with fear. “I’ll dump her. Please, I swear, man, I’ll dump her and never talk to her again.”

The sound of crushing bones and Kevin’s screams echoes in the warehouse as Kian pushes the heel of his boot into Kevin’s hand. “Too late, Kev. Too fuckin’ late.”

“Fuck. Why do y’all care anyway? She’s just a fat bitch. She’ll probably fuck all of you without even blinking. You think I’m the only guy she’s banged?”

It happens so fast I don’t realize what Ronan’s done until a small pool of blood appears around Kevin’s crotch.

Kian’s the one I would have put my money on shoving a knife into someone’s scrotum. Ronan never loses his cool. He never appears to give a damn about anyone or anything. He’s funny and charming—he has to be since his dad’s a world-famous business tycoon and his mother is the most famous face of Bollywood. So seeing Ronan act like an animal is shocking.

“What the fuck?” Kevin screams.

Kevin holds his crotch with one hand in a pathetic attempt to salvage his severed appendage. “You cut off my dick. All I did was fuck some whore.”

Kian whips the knife from Ronan’s hand. The sound of pierced flesh punctuates the air as Kian thrusts the knife under Kevin’s chin until the tip is visible at the top of his head.

“Why did you have to ruin all our fun?” Ronan demands, shaking his head.

Blood drips from Kevin’s chin as Kian pulls the blade out of his head and shoves it back in. Again and again. “He needed to shut the fuck up.”

A frustrated Ronan throws his hands in the air and growls, “Better call the cleaners.” He turns to me. “She’s gonna think he ditched her.”

“Good. She’ll be licking her wounds, and we don’t have to worry about another fucker touching her,” Kian mumbles.

Kian shrugs. “Never said I wasn’t. Facts are facts. If she’s crying into her pillow at night, she isn’t suckin’ another guy’s dick.”

I hate that a part of me agrees with Kian. She isn’t ready for us, and as much as I’d kill a million people for her, I don’t want to leave a trail of dead bodies in my wake and tip off my father. The man might be a ruthless killer, but he’s never given enough of a fuck about anyone to risk getting his hands dirty for them.

Ronan pulls out one of the white handkerchiefs he always carries. “Let’s call the cleaners and get the fuck out of here.”

I pull out my phone and dial the number Ronan’s father so generously gave us during our high school graduation. Ronan’s dad might have more money than God and all the connections of the devil, but eventually, he’ll get sick of having to clean up Ronan’s mess. The guy might not kill on the daily, but he’s a magnet for scandal.

“One day, your dad’s gonna cut off that never-ending money tap,” I tell him.

Ronan smirks. “Nah, my mom won’t let him. The man loves her so much he’d slit his own throat if she asked him.”

Kian paces back and forth, holding the bloody knife in his hand, his face flushed with venom. “What are we gonna do about her?”

“You gonna drink or sit there looking like a fish out of water?” Annie, a girl I met during rush week, asks.

I gaze at her and then at myself. We couldn’t be more different. She’s thin, blonde, giggles in all the right places when a guy talks to her and shows more skin than any other girl in the bar. It’s no shock that all the guys in the bar are trailing her like pathetic dogs.

I gaze at my jeans and long-sleeved v-neck t-shirt. I must look like a bag of potatoes. “I’m okay with my pop, thanks.”

Annie knocks back what must be her tenth blow job. “Suit yourself, girl, but I’m gonna turn up.” She grabs the hand of some muscular football player-looking guy and shakes her ass to the dance floor.

I have no clue why I came here. Just like the idea of me rushing for a sorority seems beyond odd. I’m not into this, not into people, dancing, and being surrounded by gyrating bodies humping on a dance floor.