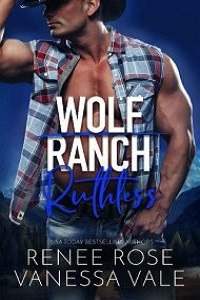 I seriously couldn’t get my clothes off fast enough. The full moon was driving me fucking nuts this moon cycle. The last couple days, it felt like the monthly pack run would never arrive.

As we raced to strip off our clothes in the mudroom of the pack cabin, I tore my jeans getting them off my legs.

“Easy there, champ,” Boyd said to me with a lazy grin. Fucking easy for him to say—he no longer has the raging urge to mate since he found his female last summer.

Not that the sharp intensity I felt to run was about the urge to mate. I didn’t even crave the usual full moon joy-fuck with any of the unmated females. What I needed was to run, run hard. Push myself because I was desperate for something I didn’t even know.

I kicked off my second pant leg with a frustrated growl.

“Moon got under your skin?” he asked. The rodeo champ was too easy going for his own good.

“I guess,” I muttered, running a hand over the back of my neck.

Karen, the she-wolf who’d been trying to hook up with me for the last couple moons, tried to make eye contact, but I dodged the glances. I had zero interest in pursuing sex with her tonight. Or ever. My wolf snarled at the thought of touching her, and it wasn’t because she’d already tried to hook up with every other unmated male in the pack. It was normal for unmated wolves to screw around during the full moon, usually without any weird expectations, but Karen was clingy. And right now, I couldn’t wait to shake her.

That was the fucking confusing part. Usually the aggression with the full moon—the need to run and hunt—was equal to the need to fuck. And while the randiness was there—hell, my boner was swinging in the wind as I jogged outside—none of the usual choices sparked any interest from me.

No, this primal feeling that something had crawled under my skin had me running in human form before I’d even shifted, the ground hard beneath my bare feet.

“Race you to the other side,” my brother Clint said, goading me by smacking my bare ass as he dashed by. The fucker.

His mate, Becky, was human, so she didn’t shift; however, she was always amused by his antics on a run. And well satisfied when he returned. I’d put money on her expecting their second pup anytime by the way they got it on.

With a snarl, I dropped to all fours, pine needles skidding out below my giant paws as I shifted and took off at a sprint. The night air was cool, not a cloud in the sky. Perfect. I chased my older brother, nipping at his flanks like we were still teenagers, but when we finally reached the ridge, I dropped back. Stopped. Something pulled me in the opposite direction from him and the others.

I longed to go down the mountain. Toward the Sheffield ranch next door.

Where it was forbidden to run.

Boyd ran by, his wolf loping with an easy grace. He enjoyed these runs alone before heading back to satisfy his human mate, Audrey. He chased me for a moment, nipping at my heels to get me moving, but I snarled, showing my teeth, and he ran on without me.

What was down there?

It didn’t matter, I couldn’t investigate. Not in wolf form, and I’d been dying to let my wolf out all week.

I started to follow the pack, but every step I took made my agitation grow. I needed to go the other way.

I turned back and trotted to the ridge again. Put my nose in the air to sniff. There was something on the wind. Nothing detectible, nothing I could describe to another wolf, but I would swear there was a scent calling to me.

I cocked my head, listening to the yip and howl of the younger wolves in the pack learning how to hunt. Rob, the alpha, would kick my ass for breaking a pack rule. We didn’t run in human territory. Ever. It was beyond dangerous for the pack.

No one could know there were wolves in this area. There’d been issues in the past, and none of us wanted more.

But I tore down the mountainside anyway, my paws scrambling through the loose gravel on the steep slope. I ran hard and fast, following my instinct, hardly noticing which direction I was going.

Not until I ran straight past the Wolf property line, where my alpha’s family lived and ranched. I found myself on human property, on Old Man Sheffield’s land where I used to work as a teenager. Even though it had been over a decade since I’d last worked here, I knew this terrain inside and out, and it felt as much like home as Wolf Ranch.