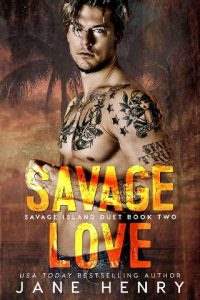 I sit on the white sand beach, staring out at the vast ocean in front of me. The blue-green waves lap gently on shore, and for a moment it’s almost nice here. I’m on an island in the middle of nowhere with a man who loves me as fiercely as anyone ever could. It’s idyllic and quiet, the only sounds the occasional cawing of a bird and slow rush of water on shore, before the tide pulls back.

It isn’t utopia, though. We can’t get off this island. We were manipulated into coming. We’re manipulated still. And as the days trudge into weeks and then months, any hope of escaping our beautiful but prison-like island slips away like the sand on shore, pulled back into the ocean with the undertow.

Instead, I’m wondering if there’s another possible combination of callaloo, the island greens, with roast duck, and maybe some fruit or something that would seem less monotonous. I wanted potatoes, but I can’t really complain, because in recent weeks we’ve found more food sources on the island. Cassava is starchy and almost like a potato. We do lots with it, like modern day pioneers. He gathers duck fat from the ducks we catch, a job I despise and won’t do, and fries slices of cassava.

It’s almost like eating French fries. Almost. I mean, it’s nothing at all like it, but you can almost trick yourself.

I hear him coming up behind me and don’t need to turn to look. Since we’re the only ones here now, a fact we’re both certain of, there’s only one set of footsteps I’ll hear, and I welcome them.

“Hey, honey,” I greet Cy as he sits on the beach beside me.

“Oh, I’m good,” I tell him as cheerfully as I can. In recent weeks, he’s grown a little more despondent than he was before. Now that we know our being here was no accident, he wants off this island worse than ever. We both do. I try to stay positive, for the both of us, and he honestly does the same. One day I’m up and he’s down. The next the roles are reversed. As long as both of us don’t stay down, we’ll be alright. I think we will, anyway.

“Hey, did you do the count today?” he asks. “The count” refers to the daily countdown we’ve been doing since the last living human on this island died. It’s a bittersweet reminder of how long we’ve been here, and we take turns ticking off the tally on a strip of bark inside our shelter. It makes us feel somehow more in control. Almost hopeful.

I frown at the ocean and nod silently. “I did. Sixty-nine,” I tell him, looking back his way.

“Sixty-nine?” he says, getting that predatory grin he gets before he’s about to attack me. Though he’s been more melancholy than he was before, his libido hasn’t slacked in the least.

“Don’t get any ideas, Cy,” I tell him, pretending to wave him off and get to my feet. “I had a plan for the stew tonight, and I have to get going on it while we have sunlight—Hey!”

But there’s no hope for it. I’m swept off my feet and into his arms before I can take a step away from him.

And before I know what’s happening, he’s stalking off to the shelter with me wrapped in his arms, and I’m kissing his beautiful mouth while he tangles his fingers in my hair. We know there are cameras on this island, but we also know our shelter is completely camera-free. With that in mind, we never do anything intimate or sexual we’d want anyone else to see in the open, but always go to our shelter for privacy.

Three cameras. That was what Derek told us before he slit his own throat and took his life. Three cameras. Those are the only connection we still have to the outside world. Derek destroyed the ones he found. I’m not sure what Cy would do if we found them. But it’s been this long, and we’ve only found one.

I wrap my arms around his neck and close my eyes as we make our way to the shelter. With a deep, cleansing breath, I take in his scent, all woodsy and masculine and clean.

“Mmm,” I whisper. “Were you doing something with the fire?”

He’s learned how to take the meat we find and make a sort of jerky with it by slow cooking. We have nothing to season it with, no salt or sugar or flavorings, but the slow cook method preserves it somewhat.