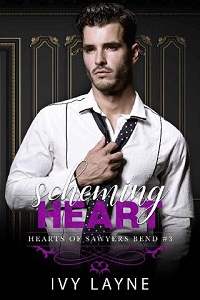 "Tennessee Sawyer! Don't you dare walk away from me!"

Fuck. I knew that voice. I'd been dodging her for weeks. Couldn't a man enjoy an early morning run in peace? Apparently not.

I came to a stop on the neatly graveled path that ran from the back of my family's inn into the trails beyond. I didn't usually get up this early. My brother Royal was the early riser, which worked out great for me. He covered mornings and I rolled into the office at a reasonable hour, staying later to cover part of the evening shift. Better for the Inn and better for my sanity.

I didn't want to wake up this early every day. I was only up now because Royal had a romantic evening planned with his girl and I'd offered to cover. But there was something to be said for the cool of early morning, the light mist slowly burning off in the newly risen sun. The Inn gardens were dreamy and green, flowers laden with dew, most of the guests still in bed. Peaceful and quiet.

At least, it had been before Vanessa tracked me down.

I came to a stop in front of my brother Ford's ex-wife. No one should be this put together so close to sunrise. Her ink-black hair was swept back from her exquisite face with a narrow leather headband that perfectly matched her red lips and equally narrow red belt. The little black dress was too formal for a summer morning, but it showed her long, sleek legs to perfection.

Vanessa knew exactly how gorgeous she was. I wondered if she knew the strain of the last month showed through her polish. Jail could do that to a person. New lines fanned from beneath her eyes, matching the grooves that cut between her arched brows and beside her full lips.

Until recently, Vanessa had been a thorn in my side. Irritating, at times mildly painful, but otherwise, no more than an inconvenience.

My older brother Ford had divorced her years ago, getting out of the ill-fated marriage unscathed except for the hefty alimony check he wrote every month. Vanessa had been happy to leave it at that, more interested in Ford's name and money than the man himself.

That is, she'd been happy enough until Ford was arrested for my father's murder. No income meant no alimony.

Since the day those hefty checks had dried up, Vanessa had been on the warpath.

I scanned the garden, hoping to see an early rising guest or a member of the staff. Anyone. I had a few inches and at least eighty pounds on Vanessa, but that didn't mean she wasn't dangerous.

The last time we'd underestimated her, she'd nearly killed someone.

"Vanessa." I kept a safe distance between us. "What the hell are you doing here?"

"We need to talk, Tenn." She sidled closer. I backed away. I didn't see a weapon in her hands, but I wasn't taking any chances.

"We really don't need to talk," I countered. "And right now, I'm wondering why we don't have a restraining order against you. Probably because we never thought you'd make bail, and if you did, you'd never be stupid enough to come back here."

"Tenn, please, you're the only one reasonable enough to talk to me."

"I'm not all that reasonable. Not anymore." I knew why she was here. Everyone thought I was a soft touch. They weren't wrong. I had a habit of falling for the whole damsel-in-distress thing. Most of the time, the woman in question deserved my help. I'd paid for legal fees when an employee tried to leave her abusive husband, had covered rent for another when a sudden illness drained her bank account.

Maybe I'd been taken for a ride here or there, but my judgment was mostly sound. Then, Vanessa had started targeting me with her sob story and vague threats. I didn't mind stepping in when someone needed help, but I was done being seen as the family sucker.

My father had been murdered.

My brother Ford was in jail for killing him, though no one really thought he'd done it.

Since then, someone had tried to kill my oldest brother, Griffen, twice, and Vanessa herself had attempted to stab my brother Royal. It was irrelevant that she'd mistaken someone else for Royal in the dark. Royal was fine, but J.T. was still recovering from his near-miss at Vanessa's hands.

It was not a good time to be seen as a soft touch. I had no intention of being Vanessa's next victim.

"Vanessa, the Inn is private property. We made it clear you aren't welcome here. Do I need to call West?"

Vanessa's face blanched at the mention of the police chief. She sidled closer again, one arm held out, beseeching. Her beautiful features transformed into a seductive half-smile. It was a little scary how well she manufactured innocent desire. I wasn't falling for it.