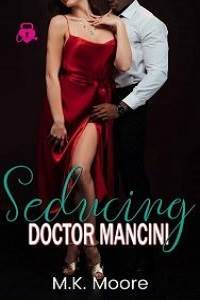 “Tones, I need you to watch Dani for about a week. Be the best big brother in the world. Please,” my sister, Evie, begs through the phone. I don’t need this right now; I think as I pinch the bridge of my nose in order to stave off the headache that’s brewing.

“About a week? Why?” I ask, wondering how occasionally babysitting my six-year-old niece, Danielle, while Evie and her husband, Paul, go out to dinner got to a week of constant watching.

“Paul surprised me with a week in Majorca,” she says excitedly.

“Majorca? Is that still a thing?” I ask, chuckling. The Spanish island has been a popular summer destination for British people for years, but I didn’t realize that anyone under the age of fifty still went there. They have been married for seven years and never took a honeymoon, so I guess I can’t begrudge them a trip.

“Yes, of course,” I tell her though I’d like to tell her no. I am too damn busy with this merger between Harris Media Entertainment and Flemington Pictures.

“I know you’re busy with work, but as you know Mom and Dad are in Japan directing Goat and the tickets are non-refundable.”

“I promise, I’ll return the favor one day,” she says and I scoff. While I am divorced, I don’t ever see getting married again in my future. I’ve sworn off women since my ex, Talia, ruined my life and tried to ruin me financially.

“Tomorrow. Early. We have to be at Heathrow at midnight.”

“Perfect. I got your room ready in the hopes that you’d say yes.”

I leave work at five for the first time in years and grab a cab to my place to get some things together before grabbing another one to take over to my sister’s East London townhouse. It’s a three-bedroom monstrosity, but she loves it. Though I can afford to live anywhere, since my divorce four years ago, I’ve lived in a tiny flat above a Chinese restaurant. It’s perfect for me since I pretty much just sleep there.

You might be thinking that I’m hung up on Talia, that I haven’t moved on from her and you aren’t alone in that thinking but it couldn’t be further from the truth. I don’t believe in love anymore that’s all. I thought I was in love with Talia, an actress from America, but I couldn’t have been more wrong. She used me to get ahead and never really gave me the time of day after we got married. We were married for six of the longest months of my life and I can never put myself through that torture again. At forty, I’m wiser than I used to be and I don’t need a woman to be happy. I haven’t been with a woman since well before I met Talia. She said she wanted to wait until we were married and I respected that. Of course, I didn’t know she was fucking everyone else in Hollywood, but that’s a different story. When I tried to get an annulment based on the fact that we never consummated the marriage, she contested it and said I was lying. My word against hers and in California that’s key. She got half of my assets and I moved home to London. I’ve honestly never been happier. Hollywood is toxic. It’s amazing what you can accomplish without constantly thinking about sex.

I knock on the door and Danielle shouts from inside to come in. Pushing the door open, I find her in the sitting room watching some cartoon on the telly.

“Uncle Tones,” she shouts upon seeing me. She jumps up from the sofa and runs over to me. “Mum said you’d be watching me. We are going to have so much fun,” she says. I crouch down and she puts her tiny arms around my neck. Her accent is slightly affected by her mother’s British accent and her father’s American accent.

“Yes, my girl. We are,” I tell her. I had already decided to take the week off though I can’t really afford the time right now, but family first.

“We can go to the zoo, the cinema. Loads of fun things,” she says moving back over to the sofa.

“We’ll have plenty of time to do those things, punky,” I say, using the nickname I’ve always called her. I set my bag down on the floor then move to the wingback chair by the fireplace, sitting down. Her father was thinking ahead when he planned this trip when she was off from school. Bastard.