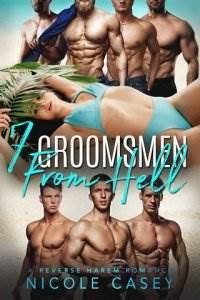 I wiped the wisps of sweat glued hair out of my face, and packed my water bottle and towel into my gym bag. I’d just finished another of ‘Lady Kate’s Killer Pilates’ sessions and was near to collapsing. Dinner and a shower, and I’d be lucky to make it to the bed before passing out.

“Okay,” I said to Anna, who was the demon who convinced me to join her in the sessions, “what’s the big news?”

Anna, a cute, tall and slender woman with black hair in a pixie cut and dark blue eyes, reached into her bag for a moment before whipping around brandishing a black, velvet box. She tipped the lid aside revealing a stunning, pink-gold, diamond ring. By my estimate, it was twenty grand at least, but Kent was a world-renowned football player, so it was probably chump change for him.

“He did it! He proposed!” she yelped.

I let out a little screech. I wasn’t a chipper, cheer-for-everything kind of girl, but Anna had been head over heels for Kent for a while, and I was excited he finally popped the question.

“Congratulations!” I grinned from ear to ear as Anna pulled the ring from the box and slid it on her finger. I raised an eyebrow. “So… who’s the wedding planner? I happen to know someone?”

Anna put the box back in her gym bag and pulled the strap over her shoulder. “Oh, I went with someone from my job who does it on the side.” I frowned and then Anna let out a huge, barking laugh. “I’m joking. Obviously, I want you to plan my wedding, you dope. And none of this ‘family discount’ nonsense either. It’s your business and I support you, so I’m paying full price.”

The notion made me fuzzy inside. “Thanks. When can I get started?”

“I was hoping you’d ask that.” Anna reached back into her bag and when she came back that time, she had a huge, dark blue binder. “Here are a few things to get you started.”

I took the binder, feeling its intense weight threaten to make me drop it. “A few?”

Anna laughed. “Well, I’ve been planning for this day pretty much ever since Kent asked me on our first date.”

I flipped open the lid to the binder and looked at the front page titled, ‘NECESSARIES.’

“Destination wedding, huh?” I said, “And who’s the one bridesmaid?”

Anna smiled at me. “Who else, but you?” she said sweetly. “That is, if you accept? Will you be my maid-of-honor?”

I couldn’t believe it. I knew Anna was without siblings, but I never thought I was who she would want to hold such a prestigious title on her special day. “Of course!” I threw my arms around her in a huge hug, nearly killing us both with the binder. I pulled away and tucked it in my gym bag as we headed for the door of the studio. “So, who are the groomsmen?”

Anna’s mouth curved down into one of strained ‘uh oh.’ “So, here’s the thing. Despite my begging, Kent has insisted on bringing his seven best friends as his groomsmen. Five of them he plays football with, his accountant, and a doctor he knows from his head injury.”

“They’re a bit of a handful. Let me be more specific, they’re a handful when they’re on their best behavior, when they’re at their worst…” Anna’s voice trailed off like she didn’t want to say more for fear of scaring me off.

Anna shook her head. “Not these men.”

Anna tilted her head in thought for a moment as we walked down the street in the brisk, Texas air. “So, you know all those rumors that Christian Bale freaked out on some extras on set and is secretly a huge jerk in real life?”

“And how Ken Jeong seems like a dufus, but he’s actually a doctor and super smart?” she continued, and I nodded. “And how drop dead gorgeous Jason Mamoa is?”

I imagined Aquaman’s bulging muscles and tribal tattoos. “Oh, he really is.”

“All of it,” Anna responded.

I could still clearly remember the moment it all went wrong; the day Anna asked me to be her wedding planner. That memory faded from my mind like a bad dream. It was now just a week and a half until the wedding, and in that time I’d learned that these seven men were even worse than she described.