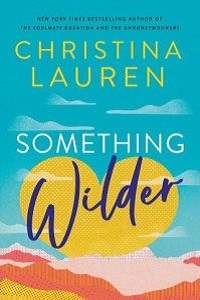 LILY WILDER’S BOOTS crunched through smooth gravel as she made her way from the barn to the lodge, surveying her favorite place on earth. Behind her, horses stepped up to slurp from the water tank, thirsty after a long night out in the pasture. Smoke drifted from the chimney of the big house and into the clear gray sky. The dawn was cool, the sun just breaking over the mountains.

She’d already been up for hours.

On the porch, a long shadow waited for her, holding two mugs. Her heart gave a heavy, infatuated jab at the sight of Leo—sleep-rumpled and grinning, bundled up in sweats and a fleece. Without question, this was how she wanted to start every morning; she still couldn’t believe that from today on, she would. Lily jogged up the three rickety steps, stretching to fit her smile against his, feeling like it had been days, not hours, since she’d last touched him. His lips were warm, soft against her wind-chilled ones. The heat of his fingers on her hip ignited bottle rockets inside her chest.

Leo pressed a warm mug into her hand and nodded to the caretaker’s cabin across the river. “He walked over the bridge to Erwin’s,” he said. “Saying goodbye.”

Was it odd that she had no idea where her father was headed or how long he’d be gone? If it was, Lily didn’t let the thought penetrate very deeply; more demanding was the way her pulse banged out a celebratory blast of a song: her life was finally starting, and somehow, this summer, while she’d learned how to manage nearly every aspect of the ranch, she’d also fallen in love. It was a love that surprised her—anchored and assured, clothes-shredding and fevered. She’d spent the first nineteen years of her life being tolerated and planned around, but here, with Leo, she was finally the center of someone’s world. She’d never smiled so much, laughed so freely, or dared to want so ferociously. The closest she’d felt before was saddling her horse and racing across her family’s land. Those moments were fleeting, though; Leo had promised he was here to stay.

She tilted her chin to gaze up into his face. He’d inherited his Irish father’s build and his Japanese American mother’s features, but the soul inside was all his own. Lily’d never known anyone as quietly, firmly grounded as Leo Grady. She still couldn’t believe this steadfast man was willing to uproot everything for her.

She’d asked him “Are you sure?” a hundred times. Wilder Ranch was her dream; she knew better than to expect running a guest ranch year-round to be anyone else’s. It certainly hadn’t been her father’s, though at least he’d put in the bare minimum to keep it solvent. For Lily’s mother, the ranch was just another thing she gladly left behind. Sometimes Lily felt like she’d spent every day of her life waiting for the moment when she could make this ranch her forever. And now it was here, with Leo to boot.

“I’m sure, Lil.” Leo’s free arm came around her shoulder, guiding her right up into his side, where he tucked her close and bent to kiss her temple. “You sure you want a rookie like me here, though?”

“Hell yes.” The words were loud in the quiet morning. In the distance, her new foal whinnied back. Leo looked at her with adoring eyes. He was new to ranching, true, but he was also a natural with the horses, capable in a million tiny ways, and a convenient top-hook-in-the-tack-room kind of tall. But none of that was why she wanted him there. She wanted him there because Leo Grady was undeniably hers, the first hers she’d ever had.

He smelled clean from the shower, and she curled in, pressing her face into his neck, searching for some hint of his sweat, the intensely masculine scent she’d felt gliding over her skin late last night.

“I made you breakfast,” he murmured into her hair.

She leaned back, smiling hopefully up at him. “Your mom’s scones?”

This made him laugh. “You act like she invented them.” He bent, covering her mouth with his, and spoke around the kiss. “She usually makes us rice and fish. Pretty sure these are Rachael Ray’s scones.”

Duke Wilder strode across the frosty grass and onto the porch, a small twitch of his bushy salt-and-pepper mustache the only indication he’d seen how pressed together they’d been.

But then the moment passed, and his eyes brightened. Duke was always happiest when he was on the cusp of leaving. When Lily was little, his work took him as far as Greenland, but his radius of adventure had shrunk dramatically when her mother left them seven years ago and Duke became anchored down by a daughter and—in the summers, at least—the guest ranch in Laramie. Now she was grown, and he was finally free to enjoy being a niche celebrity who was deeply fixated on his childhood dream of finding the piles of money some outlaws hid in the desert more than a hundred years ago.